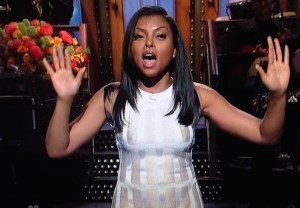 Our 25-day national nightmare is over.

Almost four weeks after the end of Empire‘s Season 1 finale, Taraji P. Henson (AKA She Who Absolutely Must Be Nominated for an Emmy in 2015) returned to the small screen to host a decidedly above-average episode of Saturday Night Live.

Yeah, a few skits didn’t quite live up to their promising concepts — I really wanted that Game of Thrones parody to be great… but the jokes played fairly obviously, and it didn’t give Henson much to do. Still, Cookie Lyon’s portrayer performed with robust energy and a decided lack of self-consciousness that elevated the material she was given.

BEST: CECILIA GIMENEZ ON WEEKEND UPDATE
Kate McKinnon (the night’s hardest-working cast member) brought back her Ecce Homo “painter” to weigh in on the controversial/hideous Lucille Ball sculpture in Celoron, N.Y. McKinnon’s Gimenez described with glee and admiration the statue’s “Paulie Walnuts” sideburns, serial-killer face and disturbing mouth (which says “I kill you! I kill you in your sleep!”) — and scored the night’s biggest laughs in the process.

BEST: HOME 2 TRAILER
Admittedly, SNL has had stronger movie-trailer parodies than this imagining of the animated hit filming a sequel with even greater hip-hop cred. But Henson’s take on Nicki Minaj proved brutally, beautifully accurate, and the last-second inclusion of crazy-creepy Die Antwoord provided a rare recent instance of the show risking going over some viewers’ heads in the glorious name of comedic specificity.

BEST: COOKIE LYON ON SESAME STREET
You had to figure SNL would play with a variation or two on Henson’s super-popular TV character’s name — but an Elmo fur coat and the recycling of the line “You need to stop rappin’ like you from the streets, ’cause you not about that life!” to Mr. Snuffleupagus were pretty genius. As for Cookie vs. Cookie Monster, the blue furry one never stood a chance, did he?

HONORABLE MENTION: HILLARY RODHAM CLINTON CAMPAIGN ANNOUNCEMENT
SNL‘s cold opens have been consistently woeful all season, so kudos to Kate McKinnon for opening the show with her unflinchingly ambitious, tight-jawed former Secretary of State attempting to film a social-media announcement of her intent to run for President. “Citizens!” she sternly declared, “you will elect me! I will be your leader!” Darrell Hammond returned unexpectedly as possible “First Dude” Bill Clinton, and from his “Did someone say ‘women everywhere’?” to his relief that ’90s telephones didn’t record video, he doubled the number of laughs in the segment.

WORST: OPENING MONOLOGUE
Henson fully committed to a Gospel jam about having “made it” in Hollywood (or, maybe more specifically, about finally being recognized by white people). Alas, though, the punch lines here were as leaden as an x-ray apron and left me wondering why the show so regularly foists musical numbers on its guest hosts when said efforts are so rarely memorable or LOL-worthy.

WORST: HLN TRIAL REPORT
Henson was left utterly adrift — without a single decent one-liner to which she could cling — in a sketch that found her as a prosecutor questioning a high-schooler (Pete Davidson) who sounded positively thrilled by his experience with statutory rape by a teacher twice his age. Not only was the writing on this one utterly lazy, but I wonder if Lorne Michaels & Co. would’ve ever, ever, ever tried to wring laughs out of a similar setup with a female victim and an older male educator. Nope, nothing about this sketch was clever enough to replace the adjective “deplorable” as the main way to describe it.

Your turn. What did you think of Taraji P. Henson’s SNL hosting gig? Take out poll below, then sound off in the comments!