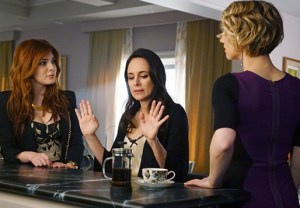 Is this really a photo of the trio destined to take down Amanda Clarke?

Revenge returns Sunday (ABC, 10/9c) with the final five episodes of Season 4, and showrunner Sunil Nayar advises TVLine to keep an eye on Victoria, Margaux and Louise, who might just be the Hamptons’ versions of Once Upon a Time‘s Queens of Darkness. (Even though Louise looks more like an Ariel than an Ursula.)

“Louise is someone who’s always looking for, not just love, but someone she can trust,” Nayar says of Nolan’s ex-to-be potentially joining forces with Victoria and Margaux. “Betrayal is a touchstone for her, and she’s learned a lot of new facts she didn’t know before — especially things that her husband didn’t tell her, like who Amanda Clarke actually was.”

Nayar says we can expect see a more “kinetically charged” Louise moving forward. “You’re going to see her take a very interesting turn,” he adds. “She’ll start to question her fidelities to everybody she’s met on the show and make some very dramatic decisions as we head towards the finale.”

As for Victoria, Nayar promises that Amanda’s longest-lasting nemesis will only be “energized” in her ongoing efforts to destroy her. “Amanda’s now open to the world,” Nayar says, “and there’s going to be a bit of a calling on the carpet for her.”

We’ll have more Revenge scoop coming your way next week, but for now, drop a comment with your hopes for the final five episodes below.