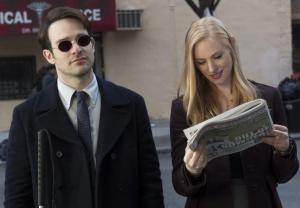 When we first meet Matt Murdock in Marvel and Netflix’s Daredevil, he’s a nine-year-old boy laid out on the street immediately after a terrible traffic accident. Matt saved an elderly man’s life, but toxic chemicals seeped into his eyes, causing him to lose his sight. Of course, as we will soon learn, he also gained some special sensory gifts that fateful day.

Years later, grown-up Matt (Charlie Cox) asks forgiveness in a confessional — not for what he’s done, but what he’s about to do. The next time we see him he’s head-to-toe in skintight black, wearing a mask with no eye slits while beating the daylights of human traffickers in NYC’s Hell’s Kitchen. Using MMA fighting skills with a ninja twist, Matt’s alter ego Daredevil is unlike other superheroes: he’s not out to save the world, he’s out to save the neighborhood.

Forget the Ben Affleck version, if you haven’t already. Armed with pitch-perfect casting, a deep bench of story material from the acclaimed comic book series, street-level drama with a gritty Taxi Driver-style aesthetic, and astonishing fight sequences on par with the Marvel films, Daredevil has the potential to become one of the best TV adaptations of a superhero property ever. (Written by Scott Huver)

Agree? Disagree? Fall somewhere in the middle? Grade the premiere below, and then hit the comments with your Daredevil feedback! 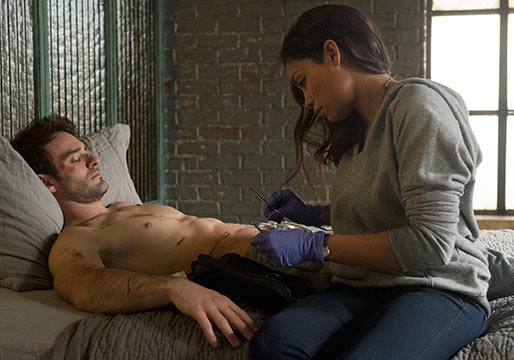