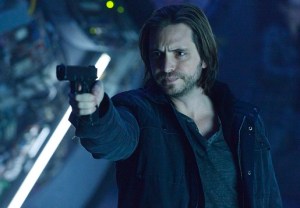 As expected, 12 Monkeys‘ Season 1 finale on Friday night was a bananas mind-bender that took no prisoners.

By the time it was all over, so many crazy questions were left up in the air that I almost forgot Aaron perished at the start of the episode. And not only does he die, but he does so after Cole beats him up for information as his ex Cassie watches. Then he burns to death after a fight between the men breaks out, his agonizing screams piercing the air as Cole convinces Cassie there’s nothing they can do and urges her to run. Brutal.

Eventually, Cole and Cassie track Ramse to the building where the time machine is being developed. He wants to destroy it to protect his future and his son. If Cole never travels to stop the plague, then billions die, but his son gets to live one day. Cole says he wouldn’t do that for one life, but Ramse knows what’s in his friend’s heart. Isn’t he doing all this not for the good of mankind, but so Cassie won’t die one day? After all, he loves her.

Cassie enters and urges Cole to shoot Ramse. He’s The Witness, he’s responsible for everything, she yells. Ramse claims he’s not, but Cassie, getting more badass by the second, only says, “He made his choice,” and shoots him. She gets hurt in the crossfire, too, and starts to bleed internally. The only way to save her, Ramse argues, is to inject her and send her to Jones in the future.

“I’m going to see you soon,” Cole tells her as he places her in the time machine. (How gorgeously shot/lit was that scene?)

“I don’t think so,” Cassie sadly replies before landing in 2043.

Meanwhile, Striking Woman – yes, that is how she’s credited – is informed that The Twelve are ready. So who or what are these mysterious Twelve? Babies! In 28 years, they’ll grow up to be the weird-looking misfits who break into Jones’ compound to complete this cycle.

“All of this is preordained,” Striking Woman explains. “Scripted by time. Ummovable. Because there is nothing more powerful than fate.”

But is it really as set in stone as she claims? Cole is determined not to let Ramse meet his fate. “No one has to die,” he says, helping his wounded friend. “We’ll find another way.”

As for the virus, the release is “out of our hands,” Striking Woman’s voiceover informs us as Jennifer and her many ominous-looking cases board a plan to travel the world. But this isn’t a personal vacation. “I have work to finish,” she declares. Um, what?! In the words of Cassie, “I don’t have time for your crazy bullsh-t. There’s too much at stake, and my patience is gone.” So please tell me what is going on!

12 Monkeys fans, what did you think of the finale? Are you relieved the show got a second season to answer all these mysteries? And how soon can we get Cole and Cassie back in the same timeline? Because that’s where the show really shines.