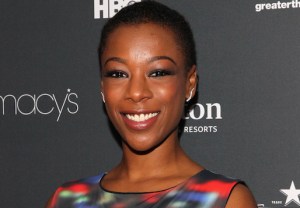 Orange Is the New Black‘s Samira Wiley will find herself on the other side of the prison bars when she guest-stars on a May sweeps episode of NBC’s Law & Order: SVU.

TVLine has learned exclusively that Wiley will appear in the May 6 episode, titled “Perverted Justice,” as Michelle Thompson, a woman whose father is in prison on incest and rape charges, due to testimony she gave as a child victim. But now, as part of a 12-step program, Michelle is trying to make amends to those she’s hurt and — and that includes admitting that she lied on the stand.

The highly volatile case will pave the way for SVU vet Dann Florek to return as retired Captain Cragen, who remembers the original case and may have evidence that could change the convict’s fate, while Brooklyn Nine-Nine‘s Andre Braugher will reprise his role as Bayard Ellis, the Johnsons’ attorney.

In addition to her run as OITNB’s Poussey Washington, Wiley’s TV credits include episodes of Person of Interest and Unforgettable.