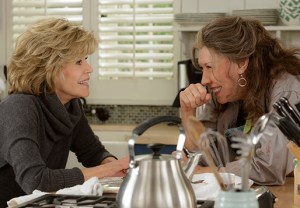 Much like grief, there are five stages of losing your husband to a gay man. And Netflix’s Grace and Frankie is about to delve into every one of them.

The streaming giant has unveiled the trailer for its upcoming comedy, starring Jane Fonda and Lily Tomlin as two women whose husbands (played by Martin Sheen and Sam Waterston, respectively) leave their wives for each other.

Press PLAY on the video below to see the titular pair experience shock, denial, confusion, rage and reflection in the face of their new lives as single ladies.

Grace and Frankie hits Netflix on Friday, May 8.

* Baz Luhrmann’s The Get Down, Netflix’s upcoming original series following a rag-tag group of South Bronx teenagers in the 1970s, has cast four up-and-comers in its lead roles: TJ Brown as Boo-Boo, a mechanically-minded 14-year-old; Justice Smith as Ezekiel, a smart and resourceful teen determined to make his mark on the world; Shameik Moore as Shaolin Fantastic, an enigmatic child of the streets; and Skylan Brooks as Ra-Ra, the voice of reason among his friends.

* Mamie Gummer (The Good Wife, Emily Owens M.D.) will recur in Season 2 of WGN America’s Manhattan, playing Nora, a beautiful and intelligent spy who uses her charm to pass atomic secrets to the Soviets.

* Jeopardy! and Wheel of Fortune have both been renewed through the 2017-18 season.