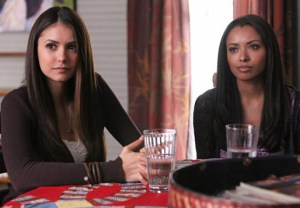 Vampire Diaries fans aren’t the only ones saddened by Nina Dobrev‘s decision to leave the CW drama at the end of its current season.

During an appearance on VH1’s Big Morning Buzz on Wednesday, Kat Graham became the first TVD co-star to publicly address the exit, which was officially announced Monday on Instagram.

“It’s very bittersweet,” she admitted. “We’re all family, and you always want to stay together forever, but everyone has their journey, and all you can do is wish them well and support them. This was a decision that I know was made a long, long time ago. I’m just excited for her, and to see what’s next.”

Graham also promised a “cool, epic battle in the season finale,” so at least we know Season 6 will go out with a bang.

Watch Graham’s interview below, then drop a comment: How do you feel about Dobrev’s departure?