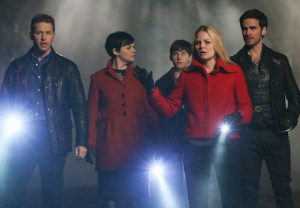 Author, Author! ABC’s Once Upon a Time has finally revealed the person who put to paper (at least some of) the tales in Henry’s storybook. Now, it’s a race to see who can hunt down the slippery scribe and request (or demand) a rewrite. All the while, Emma continues to reel from the reveal of her ‘rents’ dark secret.

With the final salvo of Season 4 episodes kicking off this Sunday at 8/7c, TVLine invited co-creators Adam Horowitz and Eddy Kitsis to give a peek at what’s ahead, as well as field a burning question.

TVLINE | The Author (played by Patrick Fischler) is on the loose. Is it not just about who can find him first, but who can convince him to do their bidding?
ADAM HOROWITZ | That’s certainly a large part of it. We wanted to get to the reveal of the Author sooner in the season that we thought people might expect, by bringing him out when we did, and now it’s about what happens with him out, what happens with who he winds up in contact with, what is everyone’s agenda and how do they cross? And what does the Author himself want? Where did he come from and what is he all about?

TVLINE | He does seem to have some sort of agenda, seeing as he was a somewhat mischievous “recorder” of stories and took some liberties.
HOROWITZ | Absolutely. In the episode that just aired, we saw that he was banished to the book for “breaking the rules,” for changing things, so the question is: Why does he want to change things? What did he change? 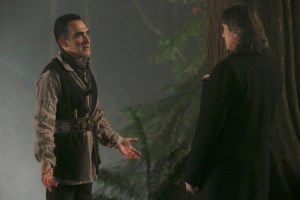 When did he start changing things? Where did he come from? All these questions are ones we’re hoping the audience is asking, because were about to give you the answers.

TVLINE | By the way, great casting there with Fischler. He’s great at playing weasely types.
EDDY KITSIS | We loved him when he was the comedian on Mad Men, and he played a Dharma guard for us on Lost. We’re just huge fans. And in an episode coming up, “Sympathy for the De Vil,” we not only really get to unleash Cruella but you’ll also see a lot of Patrick in that, and he’s just fantastic. We’re really happy with what he’s doing.

TVLINE | Gold has hinted that he has something that will compel Regina to do his bidding. What can you say about that something‘s nature?
KITSIS | It is going to be revealed Sunday night — and like all good villains, they take what you love and use it against you.

TVLINE | I ask this only because it was revealed off-camera over a commercial break: Did Emma learn the whole truth about her parents’ secret?
HOROWITZ | Yes. Yes. But more of that is explored right from the get-go in this Sunday’s episode. We’re going to dive head first into what Emma has learned about her parents and how she feels about that, and how that shapes their relationship going forward.

TVLINE | Because thus far she seems “significantly peeved” yet perhaps not “overly incensed.” Or should we not stop worrying about her crossing over to the dark side?
HOROWITZ | We should be concerned about the Charming family and their relationships, with this new stake of the potential for darkness in Emma. It goes beyond just your normal family spat. It’s much more dangerous.

TVLINE | And what’s going on 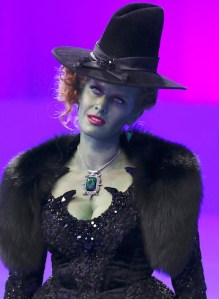 in this week’s flashback with Robin Hood and the Wicked Witch?
HOROWITZ | It’s a lot of fun for us to dip our toes back into the world of Oz. We obviously love Rebecca [Mader], so it was so great to have her put the “green” back on. It’s fun to see Robin Hood kind of in his prime as the classic Robin Hood character, on an adventure that takes him out of Sherwood Forest and right into Oz.
KITSIS | And we’re going to see how he first met Will Scarlett.

TVLINE | “Sympathy for the De Vil” (airing April 19) has to be among your, what, Top 3 episode titles?
KITSIS | It is. The [writers] room knows that we’re very big Rolling Stones fans, so they actually came out with this pitch and it got a big yes from us. It’s a favorite.

TVLINE | Are we going to learn what Cruella’s happy ending is?
KITSIS | We sure are!

TVLINE | Have there been any hints? Could a viewer have surmised what it is?
HOROWITZ | There may have been some hints, but our hope is that what it actually turns out to be will be a surprise to everyone. 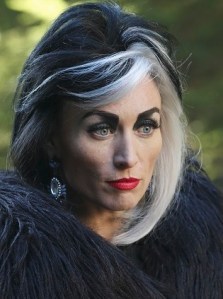 It’s a story that we had a lot of fun concocting, and we think that Victoria [Smurfit] is spectacular in that episode.

TVLINE | OK, because I have zero theories on what it could be, so I’m rather curious.
KITSIS | You know what, Matt? It’s probably one of my personal — this is just my opinion! — Top 5 favorite episodes of Once, ever.

TVLINE | And speaking of happy endings, a burning question: If villains cannot get their happy endings as long as the Savior is around, how was Ursula able to get hers?
KITSIS | It was because of a couple things. No. 1, her happy ending really was about the restoration of something that was taken from her. She wasn’t asking for anything she didn’t already possess, so that puts her in a different situation. And as we saw, Ursula was much more of a scorned villain, a tortured villain, as opposed to a true villain. People like Rumple and the Evil Queen, they’ve done much darker deeds in their past that they have to answer for, whereas Ursula…. She wasn’t a full-on villain.