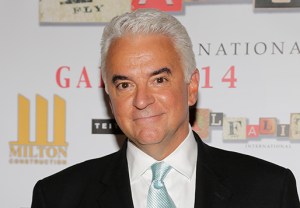 The next thing Lifetime’s Devious Maids will fix up? An All My Children reunion.

John O’Hurley, who briefly recurred on the soap opera in 2011 as movie producer Kit Sterling, has joined the cable dramedy’s Season 3 cast.

The actor tweeted a photo from the set of Devious Maids, alongside daytime’s erstwhile Erica Kane, Susan Lucci, and her co-star Rebecca Wisocky.

Hello from the set of DEVIOUS MAIDS. What do you think of my leading ladies @Susan_Lucci and @RebeccaWisocky? pic.twitter.com/NGFj2mBILL

O’Hurley, of course, has quite a few soap opera credits under his belt, including As the World Turns, General Hospital and The Young and the Restless. More recently, he has lent his voice to Phineas and Ferb, Gravity Falls and The Looney Tunes Show.

* Acting vet Peter Stormare, whose recent credits include The Blacklist and Arrow, has booked a recurring gig on Graceland‘s upcoming third season. Per The Hollywood Reporter, he will play Martun Sarkissian, the vengeful head of the Armenian Mafia who runs an international arms business.

* Disney Junior has begun production on Mickey and the Roadster Racers, an animated series geared toward preschoolers, the network announced Wednesday. Slated to debut in 2017, the series follows Mickey and Minnie Mouse, Pluto, Goofy and Daisy and Donald Duck as they take their personalized cars on high-spirited races around the world.

* Guiding Light alumna Lindsey McKeon will guest-star on two May episodes of The Young and The Restless, Soaps In Depth reports, playing a powerful businesswoman who meets with a very important Genoa City resident.