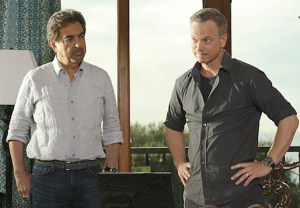 CBS’ Criminal Minds this Wednesday night aired the “planted pilot” for a spinoff focused on a globe-trotting team. If ordered to series, will you get your passport stamped and join them for the ride?

In the episode “Beyond Borders,” a family of four is expertly abducted upon arriving in Barbados for vacation. International Unit Chief Jack Garrett (played by CSI: NY vet Gary Sinise) immediately swings into action, rendezvousing with Rossi and Hotch since they previously worked a similar case, down in Florida.

The three of them — joined by Derek, JJ and the International Unit’s law expert, Lily Lambert (Breaking Bad‘s Anna Gunn), and Special Ops Agent Matthew Simmons (Daniel Henney) — make tracks for Barbados. Here in the States, Reid and Kate search the victims’ home for possible clues, while Garcia works alongside the International Unit’s own computer wonk, Russ “Monty” Montgomery (The Walking Dead’s Tyler James Williams). “Monty” basically does what Garcia does, with the added duty of interacting with the victims’ Stateside loved ones, since his colleagues are usually “an ocean away.”

On the personal front, we learn that Jack is happily married and has a son who just entered the academy — a thought that gives Dad some pause; Lily has a brother imprisoned in Thailand on a bogus, stubborn drug charge; and Matt has a wife and four kids (!) under the age of three (!!).

Thanks to the distinct yet cumulative work of everyone involved, it is deduced that the UnSub had a rough childhood and wound up murdering his family, and with his abductions has been recreating tableaus of traumatic moments. Once it is determined that he absconded with the family on a boat (in part to enjoy certain legal loopholes), it’s just a matter of time until Hotch, Garrett et al are pulling up alongside the vessel, just as things are getting quite hairy. In the end, the entire family is saved, including the young son who got thrown overboard by the baddie.

What was your first reaction to the International Unit? And if CBS picks up Criminal Minds: Beyond Borders for the next TV season, will you stay tuned?