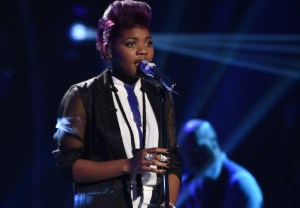 I’ve been recapping American Idol since Carrie Underwood was a humble farm girl who may or may not have been able to afford Almay — let alone be the face of its national advertising campaign.

And throughout that time, the show’s judging panel has been my go-to source for mockery, outrage and befuddlement — as well as an assortment of all-important conspiracy theories.

Back in those innocent times (when, yes, I argued vehemently that Bo Bice was the more radio-ready star than the girl who made “Jesus Take the Wheel” a household expression), Facebook was only in its infancy — and Twitter didn’t even exist — meaning there wasn’t any kind of hive-mind to weigh in on issues like pitch or song choice or arrangement or Anthony Fedorov’s relative hotness.

And that’s why heading into Season 14’s Top 8 performance night – with a crazy-vague theme of “Billboard Hits” (AKA “Whatever you want that’s kinda recent!”) — I decided to take a page from Bonnie Raitt and turn down these voices inside my head.

Yes, folks, I made the controversial move this week of muting and/or fast-forwarding through every single critique by Nicole Kidman’s pretty-haired hubby, the star of box-office flop Gigli and that guy who was on Will & Grace for 23 episodes.

I also stayed off Twitter — the place where opinions hatch half-formed, get hurled from the nest and flap their hideously mangled wings in vain — until the point at which we all had to type furiously as part of the show’s new Idol Fan Save.

Yep, the following letter grades are mine all mine — and I’m OK with that: 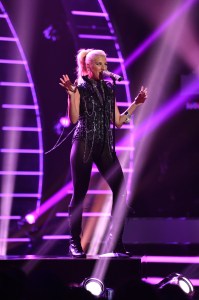 Jax – Lady Gaga’s “Poker Face” — Grade: B- | No matter how Season 14 ultimately plays out, here’s hoping Scott Borchetta & His Goatee of Doom take a chance on Jax and sign her to his Big Machine label. Because at the end of the day, she’s not merely willing to take risks — she absolutely seems to thrive on acts of musical derring-do. “Poker Face,” alas, turned out to be her biggest misfire (arrangement-wise) since “Ain’t No Mountain High Enough” — her tweaks to the chorus robbed the song of its familiarity, and its propulsive kick — and while it didn’t sound exactly bad, I don’t have any desire to hear it again, either. Perhaps more problematic, though, is my fear that Jax’s decision to perform sans pants will prove a terrible miscalculation of what Idol voters want. Could Jax go home next week? I wouldn’t be shocked. Could she roar back with an epic performance and leave me certain she’s a shoo-in for a hometown visit? Sounds totally plausible, too. And therein lies this teenage chica’s polarizing appeal. (Side note: Her iTunes recording of “Beautiful Disaster” from last week is hands-down the best recording produced this season.) 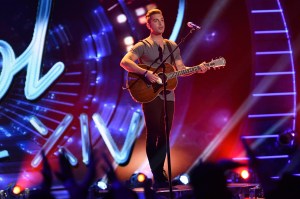 Nick Fradiani – Katy Perry’s “Teenage Dream” — Grade: B- | To quote Celine Dion (always a good idea when you’re attempting to be all dramatic), “There were moments of gold and there were flashes of light” in Nick’s performance, which to my mind, was one of the more astute song choices of the night. (Harry whined about the lyrical content prior to the performance — which made me cringe, seeing how Katy Perry’s monster smash IS NOT LITERALLY ABOUT BEING UNDER THE AGE OF 20, but rather, is about the kind of romance that transports you back to those first romantic percolations you feel as a kid. Maybe someone needs to ponderously explain to Prof. Connick the meaning of the word “simile”?) Trouble was, Nick’s grasp of pitch and breath support began to slip away from him midway through the number — especially in those final ad-libs that sat about as comfortably as a ball of tin foil between one’s teeth. It all might’ve been good enough to keep Nick on the path to the Top 5 — had this been Season 12 or 13 — but in this deep a pool, dude’s failure to have a true “moment-moment” after six weeks of live performances could prove fatal. 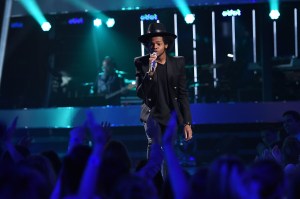 Quentin Alexander – Disclosure (feat. Sam Smith)’s “Latch” — Grade: A- | Quentin picked up the tempo this week — an astute bit of strategy to counter the complaints about his obsession with haunting midtempo ditties — and also eschewed creepy lyrics in order to play the romantic lead in his own Idol story. And as it turned out, the seductive persona fit Quentin perfectly, as he brought an authentic longing and undeniable sex appeal to lines like, “How do you do it? You got me losing my every breath.” I’ll admit there were a handful of hinky notes in the mix, but the thing about Quentin is, his vocals are always solid enough to keep me invested in the silky web of seduction that he’s spinning. 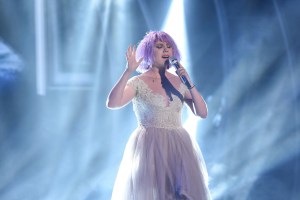 Joey Cook – Miley Cyrus’ “Wrecking Ball” — Grade: B+ | Like Quentin, Joey also got strategic this week, only she did it by sticking very closely to the original template of Miley Cyrus’ biggest ballad — and proving she’s more than the sum of her quirky jazz arrangements. Yeah, the entire performance was a bit internalized — punctuated by closed eyelids and physical stillness — but the break in Joey’s voice and her very solid sense of pitch served as a solid foundation for a true display of emotion. When the season is done, this won’t rank as one of Joey’s most memorable weeks, but as far as the competitive arc of her season goes, she did more than enough to sail through next week’s results. 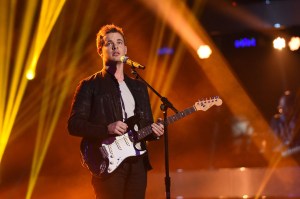 Clark Beckham – Ed Sheeran’s “Make It Rain” — Grade: A- | Unlike Quentin and Joey, Clark didn’t make any major changes to his standard operating procedure, but there was nevertheless a subtle shift in his artistry — and an intriguing one at that — as he brought out the electric guitar and served up a bluesier flavor than the throwback R&B and sensitive pop vibes that have made him a front-runner. There was a lovely dynamic range to the performance, too, and unlike his “Trouble With Love Is,” the blue-eyed heartthrob managed to stay in tune when he crescendoed to a gravel-tinged howl at the end of the performance. If Clark wants to definitively seal his spot in the Top 2, I still contend he could try to be a little less on-the-nose in terms of song selection, but other than the need for a little more physical expressiveness on stage, he’s getting harder and harder to fault.

Tyanna Jones – Rihanna (feat. Mikky Ekko)’s “Stay” — Grade: A- | As J.Lo said in introducing the performance, Tyanna seemed to be losing her spark the last couple weeks — which only made it all the more thrilling when she rebounded by unlocking a heretofore unseen vulnerability (and ironing out her nagging pitch issues) on Rihanna’s most gorgeous ballad. The hint of vibrato with which she infused the song’s extended notes punctuated beautifully the mournful lyrics. And while the last few lines got compromised by Tyanna’s runaway emotions, that kind of slip-up is always preferable to note perfection that’s void of authentic feeling, no?

Bottom Two, Competing for the “Idol Fan Save” via Twitter 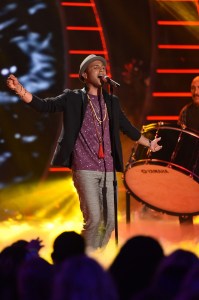 Rayvon Owen – Adele’s “Set Fire to the Rain” — Grade: B+ | As Scott Borchetta said with thudding obviousness prior to the sing-off, Rayvon Vs. Qaasim was a battle between Big Vocals and Big Entertainment — not that the two are (or should be) mutually exclusive. And lucky for Rayvon, he began his number by (metaphorically) reaching into his chest, grabbing a handful of vital organs and hurling ’em down on the stage to underscore the depth of his heartache. “Set Fire to the Rain” is a great song to have in your pocket when you’re literally singing for your existence — and Rayvon did a great job of weaving urgency through every huge note of the tune. (I even rather enjoyed his jarring/cool approach to the chorus — with nothing but booming percussion beneath his pained howl.) Yeah, there were a few places where the hat-wearing cutie overshot the note, but unlike so many reality contestants who attempt to scale Mt. Adele, Rayvon didn’t fall into a fatal crevasse. 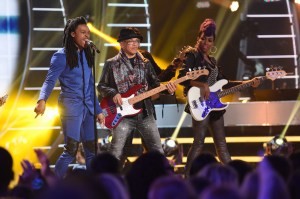 Qaasim Middleton – Outkast’s “Hey Ya” — Grade: C+ | You can’t really blame Season 14’s most frenetic, dance-obsessed performer for zeroing in on a jam with a breakdown that allows you to chant, “Shake it like a Polaroid picture!” But despite the judges’ fawning commentary (ugh, I never should’ve unmuted ’em for the sing-off!), I’m still not convinced that Emperor Middleton isn’t butt booty naked. Granted, the staging —with Qaasim at the front of a V formation of background singers and musicians — looked almost Grammy-worthy. But the questionable pitch, the utter lack of breath control and that final sad surrender of a falsetto run conspired to make the early front-runner an “Outkast” in the Twitter battle. (Sorry, that was too easy to pass up!)

On that note, I turn it over to you! What did you think of Top 8 performance night? Who were your faves? Who’s at risk? Did the right contestant get “Twitter Saved”? Take our poll below, then sound off in the comments! 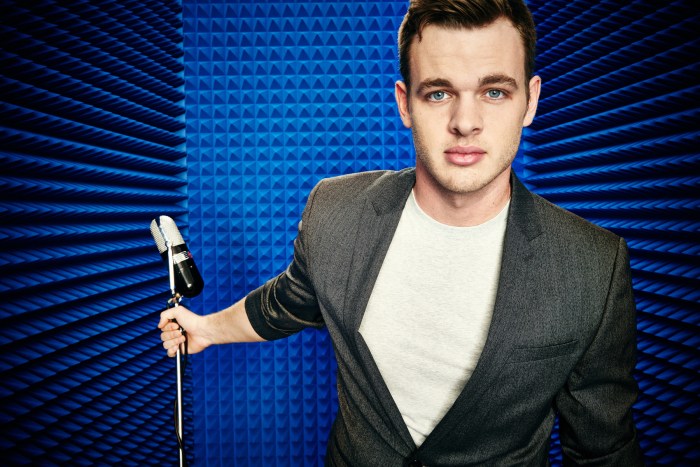