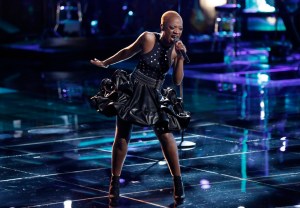 I know Pharrell Williams’ wonderkid Sawyer Fredericks is widely considered the odds-on choice to win Season 8 of The Voice — but as we all learned from that epic YouTube video “Lions-Vs.-Crocodiles-Vs.-Water-Buffalo,” premature predictions can be a dangerous thing.

Night 2 of the Live Playoffs underscored this lesson — as Team Xtina unleashed a trio of predators so fearsome that memories of Monday’s telecast were torn to bloody bits. And as if the “Dirrty” singer’s one-two-three punch of Kimberly (AKA the tutu-sporting rock-n-roll ballerina), India and Rob didn’t already take a huge bite out of the competition, Team Adam swooped in at the last second with its own graceful raptor Deanna Johnson. (She’s deadly, too, yo!)

Yep, this is going to be one of those seasons where even a slight misstep could prove fatal — no matter how much good will you’ve carried over from previous weeks.

But enough about future episodes — because there’s much to discuss from the Tuesday installment alone! Let’s cut directly to my letter grades and predictions for tonight’s performances: 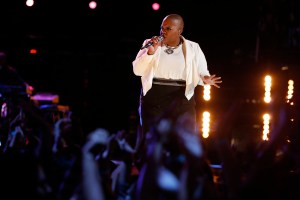 TEAM ADAM: Tonya Boyd Cannon – “Take Me to the Pilot” — Grade: B+ | Oh how I wish Adam hadn’t picked such an inconsequential piece of music for Tonya — SRSLY? The lyrics are nonsense! — but despite getting overpowered by the band just a bit on the first refrain, she brought some real grit and spiritual connectedness to the latter half of the song. Unfortunately, I’m doubtful that voters will remember that fact considering fellow R&B divas Kimberly and India one-upped Tonya later on in the episode. As a result, Adam and Pharrell’s two-man Standing O might prove her consolation prize.

TEAM ADAM: Joshua Davis – “Budapest” — Grade: B+ | Kudos to Adam for being gutsy enough to assign Joshua a British hit that hasn’t hit the U.S. mainstream. I just wish the ditty in question had a chorus that packed a little more of an emotional whallop. The good news, however, is that Joshua’s goosedown-comforter tone and dreamy delivery triumphed over what Blake noted is the most rhythm-challenged audience anywhere on the live TV today — even if there were brief moments in Joshua’s upper register where he waved the white flag rather than fighting to complete his phrases. Which is in no way to suggest that Joshua won’t — or shouldn’t — crack the Top 12. In fact, I’d bet Pharrell’s collection of garage-sale grandpa shirts that he’s a mortal lock to advance on Wednesday’s results show.

TEAM XTINA: Sonic – “I’m Going Down” — Grade: C- | Oh, Sonic! For a contestant who was virtually flawless on her Alicia Keys cover in the Knockout Rounds, how in the heck did you manage to be underneath the melody for two-thirds of Rose Royce’s epic woman-unhinged anthem? Even worse, when Sonic realized she wasn’t exactly nailing the notes, she tried to overcompensate with ad libs that shouted “I’M FEELIN’ IT!” but ultimately gave the sense that she was simply feeling a panic set in. And given the depth of Xtina’s bench this season, it’s safe to assume there’ll be no second chances after this level of blundering.

TEAM ADAM: Brian Johnson – “At This Moment” — Grade: B- | Brian’s got a sweet tone and the palpable commitment of a guy who understands The Voice is undeniably his best shot of making his living off music. But gently massaging the notes isn’t everything: Brian lost the tempo toward the end of the first verse, and the way he phrased the song made me feel like he was more concerned with where to add an embellishment than with digging deeper into a lyric that’s almost threadbare in its familiarity. (Mad props to Blake, though, for recognizing — and acknowledging out loud — the song’s storied sitcom history.)

TEAM XTINA: Kimberly Nichole – “What’s Up” — Grade: A+ | There are no words — or even emojis — to accurately convey the awesome wonder of Kimberly’s vocal tonight. She proved she’s a smart singer by sticking to the melody for the opening verse, the restraint of such confines creating a delicious tension in the performance. Kimberly released the valve briefly as she oozed attitude and grit on lines like “get real high,” and then finally erupted with the force of Yellowstone Park’s Old Faithful and proved herself a candidate for eighth-world wonder status. The length and musicality of that final, stunning glory note — the way it slid around behind the backup singers and then swooped back to the forefront like a Bald Eagle emerging at center stage — shouldn’t even be possible. Add in Kimberly’s copious tears over the fact that her 91-year-old (and very stylish) great grandmother was in the house, and you’re looking at one of the great vocal moments in Voice history.

TEAM XTINA: Lexi Davila – “All By Myself” — Grade: C+ | Xtina pushed hard in rehearsal for Lexi to not just be a singer of notes, but the teller of a story. Unfortunately, though, the teen beauty’s relative inexperience compared to her rivals was punctuated by a wobbly opening verse and a tone that tended toward shrill for most of the chorus. To be fair, her last big run landed as boldly and assuredly as an anvil being dropped on a resting housefly — but she might’ve had a higher chance of survival had she wound up on Teams Blake or Adam. Up against Xtina’s holy trinity, she may be all by herself on a plane back home come Thursday.

TEAM ADAM: Nathan Hermida – “Chains” — Grade: C | “There were some issues,” said Adam to his sweet but not-quite-ready-for-primetime contestant — which is as close to “Worst of the night” as you can get in Voice-speak. The sparse arrangement on the opening verse exposed Nathan’s flaws in terms of pitch and groove — and the sad, sole “Yeah” he coughed up during the band’s extended breakdown had all the authority of a fish-store guppy fluffing its tailfin in a piranha tank. 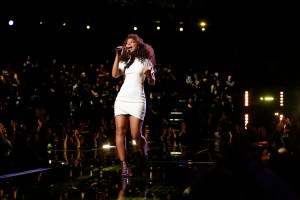 TEAM XTINA: India Carney – “Hurt” — Grade: A | India’s not merely a vocalist, she’s an actress, too — as underscored by the wild-eyed frenzy that came over her midway through her cinematic imagining of Xtina’s bittersweet hit. That she handled the opening verse with all the delicacy of a hummingbird feeding its hatchling only made the contrast of the song’s booming final third seem even more impactful. Add to that the literal cry in India’s voice on the final “I’m sorry for blaming you,” and we might need to create a new Emmy category for Outstanding Lead Actress in a Reality Singing Competition. As Pharrell put it while India took her bows, “The credits should be rolling right now!” 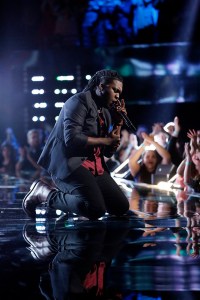 TEAM XTINA: Rob Taylor – “Earned It” — Grade: A | I was mildly ambivalent about Rob and especially his song choice headed into the telecast — and from his pre-performance package about hateful online criticism, I suspect he took the stage with a singular focus on turning doubters into fans. All I can say is mission accomplished! Rob’s ability to divebomb from piercing falsetto directly into his rich and booming lower register proved pretty astonishing, and as Adam so goofily demonstrated, dude punctuates every emotion with his entire body. It all leads to a sense that Rob didn’t merely lease or borrow the Voice stage, but he owns it outright — without so much as a principal or interest to pay off. It’s probably to easy to say of his inevitable entry into the Top 12 that he “earned it,” but dammit, he did!

TEAM ADAM: Deanna Johnson – “Down to the River to Pray” — Grade: A- | There’s something about Deanna’s ethereal, slow-burning tone that reminds me of the Cowboy Junkies’ Margo Timmins — and that’s a very good thing. Sure, Deanna’s somewhat stiff stance throughout her hymnal didn’t quite match the slinkiness she brought to the melody, but Adam knows she’s one of his best chances to make the finals again this year, and the confidence appears to be transferring to Deanna herself. I’d like to see if she can handle something uptempo, too — you can’t win a competition at a single speed – but the good news for Deanna is she’ll clearly be around next week to have the opportunity.

OK, your turn. What did you think of Night 2 of the Season 8 Live Playoffs? Who were your faves? Who would you not mind losing? Take our poll below, then sound off in the comments! 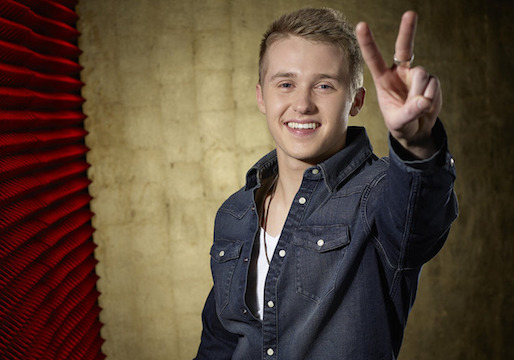