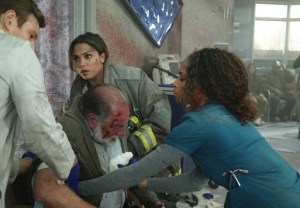 NBC’s potential spinoff Chicago Med got more than its fair share of patients on Tuesday’s episode of Chicago Fire – and one of them was a beloved Windy City firefighter!

The hospital is introduced when the truck crew decides to transport some fire victims on their own. Once they get there, a patient announces he has something worse than Ebola and then blows himself up. Severide pushes his high school pal Dr. April Sexton (Ugly Betty‘s Yaya DCosta) out of the way and gets knocked out. Jay’s brother Will (Shameless‘ Nick Gehlfuss) from P.D., on his first day of work, is prepared to black tag him and move on – noooo! – but Mills convinces him not to give up on Severide. Still, the situation is bad, especially when Severide’s vitals start to drop and he sees visions of Shay.

Dr. Hannah Tramble (The Walking Dead‘s Laurie Holden) begins surgery on the firefighter with an assist from the paramedics. It was nice touch to see Mills, who had a beef with Severide over the rescue squad position, be the one to help save him. Later, Severide claims to April that he doesn’t remember anything that happened, but his haunted face seems to suggest he recalls just how close he came to being reunited with Shay.

Casey and Dawson, meanwhile, have a different kind of response to the life-and-death stakes and get hot-and-bothered in bed that evening. “This is just a reaction to the stress of the day,” she declares. Riiiight.

During the quarantine, we also meet Sharon Goodwin (Law & Order‘s S. Epatha Merkerson), the head of the hospital, and head of psychiatry Dr. Charles (Fargo‘s Oliver Platt), whose ability to read people and behavior saves the day on more than one occasion.

When those hospital doors crash open, “There are good people, strong people, ready on the other side,” Sharon says after Boden gives a speech toasting the staff’s excellent work.

But what did you think of the Med ensemble? Outside of Platt, Holden’s strong but vulnerable Hannah made the most memorable impression on me – and possibly Will, with whom she shared a cry after the awful day. Maybe it was even enough to convince him not to go back to New York, as he was planning at the start of the hour.

Vote in the poll below to let us know if you’ll be tuning into the potential spinoff, then hit the comments to back up your pick. 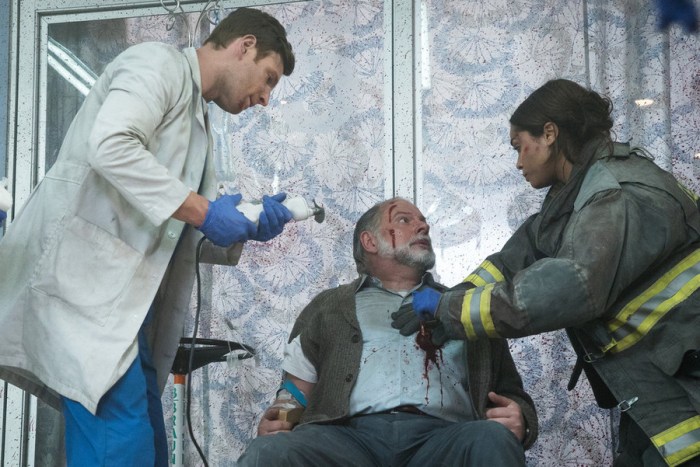