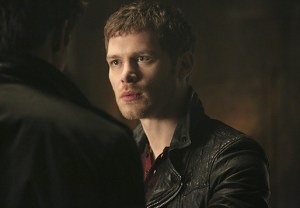 Monday’s episode of The Originals (The CW, 8/7c) marks the beginning of Dahlia’s long-awaited, not to mention long-dreaded, arrival in present-day New Orleans, and the Mikaelsons’ dear old aunt is bearing gifts — including untimely death.

“It will absolutely affect Klaus,” Joseph Morgan tells TVLine of the impending fatality, which executive producer Julie Plec tweeted about in February. “And I was very surprised about this particular person’s death, not only because I didn’t think the character would ever be killed, but also because it’s always difficult when someone you’re used to working with suddenly isn’t there anymore.”

Below, Morgan teases more of what fans can expect in the season’s final six episodes, including Klaus’ ever-growing Jackson “problem.”

TVLINE | So, we know Dahlia’s coming back. What’s Esther been up to this whole time, and how will she respond to having her sister back?
The last time we saw her, Klaus locked her in a tomb [Laughs], so I’d imagine that knowing Dahlia is coming back would be interesting for Esther. These next few episodes are going to be very interesting; even the big bads get their chance to show what’s behind it all, their reasons for doing things, and I speak from experienced on The Vampire Diaries.

TVLINE | Do you ever envision a time when Esther can live among her children in vampire harmony?
[Laughs] I don’t think it’s possible. First, it would be too difficult for Klaus to forgive her for everything, and she’s so adamant that vampires are a blight on the earth, that her mistake should be erased. I don’t see her living down the hall in Compound from her boys, preparing breakfast.

TVLINE | Klaus hasn’t spent as much time around Hope as he used to. Do you miss working with the babies?
I don’t miss working with the fake baby they bring in for the wide shots — that creepy, heavy thing. But I do miss the little twin girls who have played Hope since she was a newborn. One time, I think during the wedding episode, the babies were incredibly sick. So Phoebe, myself and the P.A. who was looking after them all got taken out with illness.

TVLINE | Now it’s Jackson’s turn to get sick. How does Klaus really feel about Hayley’s new husband?
Jackson is a sore spot. He spent all of Episode 14 talking about how he was going to kill Jackson once the unification ritual had taken place, but then he decided he’d allow him to live on. The idea that Hope may one day call Jackson “dad” really gets to Klaus. For someone who didn’t care about the child in the first episode, he’s really come to love his child more than any person or anything in the world. He’s very selfish and possessive of that love now, and the more [Jackson and Hayley’s situation] goes on, the more of a problem it’s going to become. He’s starting to feel like an outsider.

TVLINE | Everybody has their favorite couple on the show. Is there a particular pairing you’re excited about?
Personally, I do like the Jackson-Hayley relationship. I like that he’s this rough, alpha male, but he also knows how to get babies to sleep. And Josh and Aiden, but I feel like everyone’s a champion of them. Aiden’s so stoic and heroic and Josh is so funny. When he comes into a scene, we call it Krueger-izing scene. He comes in and just steals it from everyone else, so it’s been Krueger-ized.

Originals fans, who do you think will be killed next? And what are your hopes as we head into the home stretch? Drop a comment with your thoughts below.