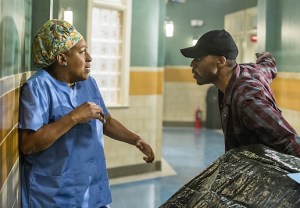 This week on CBS’ NCIS: New Orleans (Tuesday, 9/8c), medical examiner Dr. Loretta Wade unexpectedly finds herself in the thick of things when in the midst of examining the body of a Petty Officer seemingly felled by natural causes , she, lab tech Sebastian Lund and her young charge, Danny, are held hostage in the morgue. Who will rise to the occasion during this standoff? And what “wonderful” discovery comes out of it? TVLine spoke with TV vet CCH Pounder about both New Orleans… and New Orleans.

TVLINE | Tee up this episode for us. It sounds quite intense.
It is intense. After all the blow-ups and crashes, it was very interesting to get an internal piece to do, where it’s sort of about each person’s character and strength of character. It starts off absolutely casually — Wade is trying to explain to this gentleman (played by Russell Richardson) that she can only release the body to family –and besides, she’s not finished with it, so he needs to leave. Then he insists on getting the body, and we actually do try to get him out of there with it, but some very clever guards figure it out and alllll hell breaks loose. We go charging back into the morgue, locking the doors, and now we’re hostages.

TVLINE | When it gets to that point, what is Wade’s reaction? Because she’s not some hardened military vet who’s used to such insanity.
I have to tell you, it happens so fast that there is no time to do anything but follow instructions, because she has Danny (Christopher Meyer) with her, her young charge who she’s just gotten off the streets and out of danger — and now it seems like he’s gone from the frying pan into the fire. And Lund (Rob Kerkovich), he was just delivering files before getting trapped in this situation as well. So I think the most powerful thing about this piece is the transition of where strengths lie. The strong become weak, the weak ones become stronger, and everybody comes to a revelation. That sounds all very heady, but it’s a wonderful transition, especially for Sebastian Lund, who we kind of think of as our “geek god”, our words-spouter, and in this situation we actually need his help.

TVLINE | I was indeed curious about his response to it all, because being that “words-spouter,” it could go a couple different ways. He could cower in a corner, he could surprise us, he could try to outwit the guy….
He digs deep, very deep, with the help of Loretta and her really strong encouragement, and surprises us. 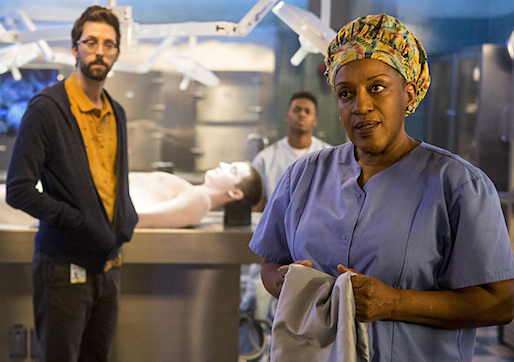 Because of her really believing in him and letting him know, “The first time I met you, I knew you had this in you, so… find it,” he does something that he’s never done before in his life.

TVLINE | I do enjoy the interplay between Loretta and Sebastian.
It’s a wonderful contrast…. They play off each other very, very well.

TVLINE | Do you have a favorite scene from the episode?
I’ve got two favorite scenes, and they’re both about transition. One is that scene with Sebastian, in the morgue, where he does something that he’s never done before — and it’s very frightening, but he does it. And then at the very end, when it’s all over, there’s a wonderful moment with Pride (Scott Bakula) and Wade, and it is pure friendship. We discover what a powerful friend pride is to Loretta Wade. I just really liked that, that it didn’t mean anything other than that. It was a terrific moment that I didn’t see coming. It left me thinking, “Wow, that really ups the ante in terms of these people. They two really have known each other a long time.”

TVLINE | How has New Orleans itself been treating you? Did you have any past relationship with the city?
I didn’t have a past relationship beyond post-Katrina, when [activist/Children’s Defense Fund founder] Marian Wright Edelman had a program to help create normalcy in children’s lives. I came in with a group of actors and we read to them books in these sort of makeshift schools that truly were not schools at all. But it was a brief experience. When I came here last year for [NCIS: New Orleans], in my mind I was thinking “post-Katrina,” so I really was surprised how far along the town had come. The city fought back; she’s got a fantastic character. It’s a strange Caribbean country plunked down in the middle of the American south. It’s very different from anywhere I’ve been.

TVLINE | As you gone about exploring all that New Orleans has to offer, what have you grown most fond of?
Well, everybody’s going to talk about cuisine, and that is not the thing that pulls me as much as the frightening amount of talent here. The musicians are ridiculously good. An actor goes to New York to prove themselves — “If you can make it there, you can make it anywhere.” I feel that every [New Orleans] street musician figures that if they can hold a crowd until they pass that bucket, they’re ready to go someplace else. They are phenomenal. The visual artists here are pretty strong, too.

TVLINE | Among your myriad TV credits, you were once on The X-Files, which is being revived by Fox. Do you have any particular memory from that experience?
Well, I was [in the Season 2 episode about] that really amazing Duane Barry “visitation.” It was an incredible show, I happened to land in that particular episode and it was really fantastic. I’m amazed that they’re bringing it back, and I’m very curious to see what they’re going to do. Technology has moved forward enough that maybe they can do some special effects that they couldn’t even try before. That should be interesting!