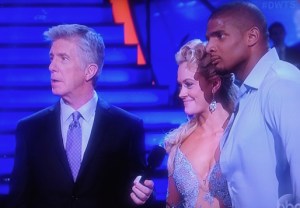 As the 2015 NCAA Tournament comes to a close this Monday evening, it’s got me thinking about how my Dancing With the Stars Season 20 bracket would have looked, had I filled one out.

Sure, I’d have Nastia Liukin and Derek Hough going to the Final Four, with Rumer Willis and Val Chmerkovskiy following close behind. I’d be a little skeptical of dancers like Charlotte McKinney and Redfoo, who seemed like odd choices for the DWTS roster to begin with.

But there are other competitors about whose futures I would have been very, very wrong, judging by the unpredictability of Season 20’s results shows thus far. Would I have anticipated that Robert Herjavec, of all people, would deliver an emotional and elegant waltz? Would I have even considered that Patti LaBelle and Suzanne Somers would become serious contenders after showing how receptive they can be to criticism? Would I have put Riker Lynch in jeopardy after he and Allison Holker danced the most memorable number of the night just one week prior?

The answers: No, no and hell to the no.

Still, all of these scenarios became a reality by the end of Monday’s Dancing episode, which found the contestants celebrating the most memorable years of their lives. Before we go over the results, here are the highlights from Week 4:

BEST OF THE NIGHT | Willow Shields and pro Mark Ballas (Contemporary) — Boasting the highest score of the season thus far (and just one point shy of a perfect 40), Willow and Mark’s routine was creative, fiery and emotional in a way that didn’t come off as cheesy. I will admit that I’m eagerly awaiting the week when Willow, Mark and/or the judges don’t bring up the 14-year-old competitor’s young age, but that’s a small complaint following a near-perfect routine.

MOST IMPROVED | Michael Sam and pro Peta Murgatroyd (Rumba) — Though Patti LaBelle and Suzanne Somers also made impressive runs for this title on Monday, it ultimately goes to the NFL star, who, at long last, didn’t perform with a pained smile on his face. Michael brought serious skill and remarkable vulnerability to the dance floor, making this week’s performance easily his best yet.

ODDEST SONG CHOICE | Riker Lynch and pro Allison Holker (Tango) — Full disclosure: You will not meet a bigger fan of Walk the Moon’s “Shut Up and Dance” than yours truly. I regularly rock out to that song in my kitchen, my car and any public place where it’s playing, much to the chagrin of the people around me. (Sorry, world.) However… the fun, uptempo jam did not pair well with Riker and Allison’s choppy tango, and it showed in both their movements and their facial expressions. From a technical perspective, this duo is consistently one of the best, but I worry that a poor song choice could be its demise.

WORST OF THE NIGHT | Chris Soules and pro Witney Carson (Rumba) — I feel bad for picking on the former Bachelor, especially after he more than earned his “Comeback Kid” nickname in last week’s routine. In Monday’s rumba, though, it wasn’t until halfway through the number that he finally brought emotional depth and real chemistry to his partnership with Witney — which, in a dance that’s only 90 seconds, was too little, too late. And, while I don’t envy Witney’s weekly task of choreographing for a mediocre partner, she seems to be giving Chris movements that are so simple and limited, he can hardly show off the potential that he does have on the dance floor.

OK, your turn. Should Michael and Peta have gone home? Whose dance was the best of the night? Hit the comments!