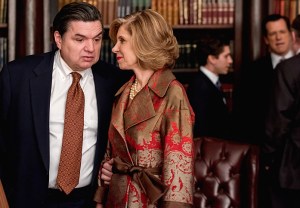 That very rare letting-down-of-the-guard from The Good Wife‘s Eli Gold refers, of course, to this week’s bombshell allegation accusing Alicia Florrick of voter fraud in her recent election win for the office of State’s Attorney. (Fret not: It looks like those racy leaked emails between her and her late lover Will are now just a minor chapter in 50 Shades of Things I Shouldn’t Have Typed Into a Computer.)

But with Kalinda’s status as a free woman (sexually/spiritually/legally) suddenly in peril, St. Alicia’s halo most publicly tarnished and even Diane (possibly/inadvertently) in solidarity with those who stand in opposition to same-sex marriage, there’s not a single Season 6 story arc or character whose hand isn’t dangling precariously above the InSinkErator.

With all that in mind, isn’t it high time the show’s troika of power females sets aside its current differences for a day-drunk-on-martinis pow-wow at some swank Chicago saloon? Or is it just me who needs an extra glass of sauv blanc these days to deal with the discord and dysfunction that’s added an extra layer of anxiety to network TV’s most unapologetically complicated drama?

Also…can I pause for a moment to say that not only are Robert and Michelle King clearly geniuses, but they also might be psychic? (I mean, how many months ago did they conceive of and produce an episode with a Religious Freedom Restoration Act (RFRA) — as it pertains to a gay wedding cake — only to have said topic be the hottest headline of the Easter 2015 season?)

OK, OK, enough of the lovey-dovey… let’s recap the action from “Loser Edit”:

THE KALINDA CODE | Turns out State’s Attorney’s investigator Andrew Wylie (the one who’s always being trailed by his toddlers — and is pretty dang sharp) is on the Internal Affairs case looking into Det. Prima’s alleged wrongdoing in Cary’s case. We all know, though, that it’s Kalinda who altered the metadata just to clear Cary’s name — and Diane who snagged the erroneous intel off Kalinda’s computer before her investigator could decide whether or not to actually commit an illegal act.

When Kalinda learns what’s up, she pays Finn a visit and — speaking only in hypotheticals — learns Diane could be disbarred or go to prison for her part in the case, even though she didn’t realize the info on Kalinda’s laptop was faked. Things go from bad to worse when Wylie realizes Prima was on the stand when the email in question was deleted — and while Finn (who also gets questioned) sweetly takes on Kalinda’s case to protect attorney-client priviliege, Kalinda’s Florrick-Agos computer buddy gets caught in a lie during his own interrogation by Wylie. “Kalinda, you’re caught. You fixed the metadata,” Wylie tells her — and the longer it takes for her to come clean, “the worse it’ll be for you and Diane.” Wait, surely Kalinda has something crafty-delicious (or involving a baseball bat in a parking garage) up her sleeve, no? But these days, the reigning Emmy champ for Character With Best Taste in Boots seems a little worn down, a little defeated by what she’s seen in the wake of Will’s death and Cary’s suffering. Here’s hoping she’s got a little fight left in her, no?

The more likely question now, though, becomes what will happen with the case once Alicia takes over at the SA’s office — and if she quashes it as a favor to old friends, whether steely Geneva will and crusading Wylie will stay silent. This all seems like too big an arc to wrap in Season 6 — but with Archie Panjabi set to exit before mid-May, expect the fan to spread the proverbial manure fast and furious over the next few weeks. 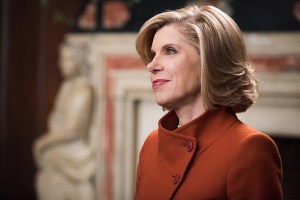 BUT THE POLITICAL IS THE PERSONAL | Diane’s new billionaire client Reese Dipple hires her to join in a debate at the conservative Plenary Institute. The subject on the docket: Whether to fund the appeal of a baker who lost a suit in which she refused to make a cake for a same-sex wedding.

Reese wants Diane to convince him the case is a loser, he says, mainly because he loves his gay nephew. And so the Lady Lockhart dives in — clearly on the side of history, but genuinely excited to duke it out with bright minds who see the law in a completely different way. Christine Baranski proves her Emmy worthiness by showing us Diane’s beautiful legal mind as it races through the ways in which the Plenary dudes’ case can be dismantled — and considers scenarios in which it might be stronger.

A better case might be that of a wedding planner, she agrees, pointing out the time, commitment, and personal contacts involved for someone who’s doing more than spending a few hours in a kitchen. As she drives home listening to NPR (naturally), she learns Dipple is funding a case of a wedding planner in Idaho seeking relief under a RFRA — and the way she slams on the breaks proves the comic high point of the hour.

Dipple invites Diane to argue a mock trial — the better for her to dismantle the case — and when the planner admits she’s worked with divorced folks (a problem area for Jesus) but not same-sex couples (whom Jesus never condemned in the New Testament), La Lockhart is in the driver’s seat. But Dipple becomes enraged when Diane hires his nephew (Wesley Taylor, aka cute Bobby from Smash!) to stand in as the plaintiff. “You have to see who you’re impacting — and it can’t be an actor,” she says, her face registering that she might be losing a key client for her struggling firm, but her instructions from Dipple to “go for the jugular” clearly giving her the high ground.

Despite the nephew’s poignant observation that as a gay man, no one ever asks him about his religious convictions (“I believe in God, too,” he points out), and despite the mock court judge ruling against the wedding planner, Dipple decides to throw his money into the Idaho fray. Three years ago, he reminds Diane, Obama and both Clintons opposed same-sex marriage — and only hopped aboard the bandwagon when it became politically expedient. “I like people who stand by their convictions,” Dipple says flatly — reiterating his belief that religious accommodation must be supported. That said, I suspect he won’t be lobbying for Diane to go west and be the face of his new and controversial lawsuit. 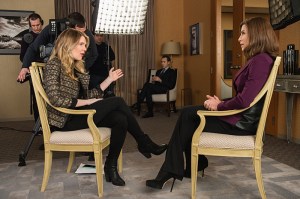 YOU WOULDN’T LIKE THIS REPORTER WHEN SHE’S ANGRY | The hour kicks off with TV reporter Petra Moritz (Lily Rabe) back in action and editing a profile/sit-down Q&A with Alicia. As she and her producer are finishing the piece, she gets a tip about Alicia’s leaked emails — you know, the ones between her and Will including including phrases like “the touch of you, the taste.”

Eli — who’s never better than when under total siege… which would make him just killer if he morph into a Game of Thrones character — threatens, cajoles and finally gets Petra to delay airing her piece by promising a sit-down with Peter. Then he proposes to Alicia and campaign guru Josh the idea of “pre-spinning the emails” with friendlier media contacts. Yeah, it’s not going to be easy to get the public to buy that Alicia’s, “You were away at depo this week. All I could think about was your hands on me. Sometimes it feels too dangerous.” is merely flirty and not evidence of an affair — especially when Alicia says she refuses to lie about the nature or her love with her deceased former boss/paramour.

And so Eli enlists Peter to sit down with Alicia and convince her of the importance of protecting her halo — at least a little. Their chat is surprising in a lot of ways — mainly because their chemistry remains so easy and so sexy, and yet those vibes have been crushed under the weight of their conflicting ambitions all season. “Have we come through the other side of anger, jealousy, disgust?” Alicia asks, before underscoring that the sit-down in the kitchen is not going to turn into a lie-down in the bedroom. “I was never been as bad as you wanted me to be,” Peter says, and it’s maybe a fair point? I never know if he’s withholding another dozen secrets or if he’s finally fully out in the open with his estranged wife. Alicia’s bit that “love is a word that’s exhausted. I wish it meant something to me” seems like merely words — I don’t think she is so divorced from her personal passion that she’s forgotten what it means. And also, doesn’t she have two kids whom she loves with all her heart? But maybe those words are for Peter’s benefit only – a way to let him know how numb she’s become in playing her part in their loveless, sexless union of political power.

Alicia gives a pre-emptive sit-down with a fawning reporter (Mo Rocca, laying on the comic sauce a little too heavily, alas), while Eli talks with a print journalist and tries to pre-discredit Petra’s piece. By the time Petra sits down with Peter, she’s been unwittingly scooped — and Peter uses that knowledge to leave her floundering, parting with an on-camera suggestion that she’s merely someone with an axe to grind against his wife.

Petra, though, gets the last laugh. When the Alicia piece finally airs, it starts out fine, until Petra wonders aloud if Alicia was “too creative, too zealous” in her quest for victory. You see, she’s got sources claiming voter fraud — that Chicago cronies rigged the election to turn some of Prady’s votes into ones for Alicia. And since we know this methodology was part of what helped Peter take home the governorship, it’s hard not to ask if the same measures didn’t benefit Alicia, too.

Wait, Alicia and Kalinda are both on the legal ropes in a major, major way? I mean, we all want to see the two of ’em in a scene together before the season is over — but I’m not sure if the Good Wife wants the show’s writing team to go full “Cell Block Tango” on us, do we?

On that note, I turn things over to you. What did you think of “Loser Edit”? How do you think things will end for Kalinda? Are you worried Alicia might wind up losing to Prady in the end? And how amazing is Christine Baranski? Sound off in the comments!