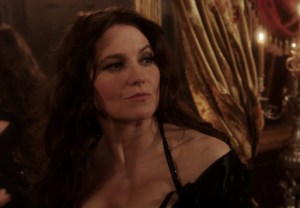 Though Salem sorceress Mary managed to complete the much-ballyhooed Grand Rite in the WGN drama’s first season finale, the second season premiere found her facing an even more daunting challenge: uniting the local enchantresses. Was she up to the task? And, more importantly, were you mesmerized by her efforts? Read on, then cast your vote.

HEARTS AND ’CRAFTS | As “Cry Havoc” opened, it was the best of times for Mary and the worst of times. On one hand, not only was the “witch pox” taking out everyone in the hilariously named Knocker’s Hole section of Salem, but Mrs. Sibley got to sing her nameless son his first lullaby. On the other hand, Tituba insisted that her frenemy do the impossible and convince Mercy and Anne to toe the line.

With her former protégé, Mary resorted to threats. But rather than shake in her boots at being told, “If you defy me, only horror awaits you!” Mercy (the most fabulously bats—t crazy character since Buffy the Vampire Slayer’s Drusilla) merely smirked and conjured up her deceased gal pals. With the “cradle witch,” Mary played it maternal and succeeded in bringing little orphan Anne around by offering to protect her fortune and virginity. (Where’s the fun in that?)

All the while, Mary pined for John, who, with the help of his Mohawk buds’ magic, made her a witness to his “funeral.” Apparently, he was so miffed that she missed their meeting in the season finale that, instead of sneaking back into Salem and asking, “WTH?,” he bonded with the Great Spirit (in a ritual that thankfully included a haircut) and plotted to metaphorically drop a house on every witch in Salem. (Oh, those nutty kids!)

Hey, wait a sec. Did I say that “all the while” Mary pined for John? What I meant was, “for a little while” Mary pined for John. Her head was soon turned by Samuel Wainwright (Stuart Townsend), a handsome doctor who surprised her by standing with her against Salem’s sexist selectmen. (That he referred to her as “the Queen Elizabeth of Salem” didn’t hurt, either.) At first, Mary wasn’t bothered in the least that he was determined to cure the plague that was turning the town into one big cemetery. But then he found the Malum and Isaac (worse for wear, but alive!) in the woods… Ruh-roh.

PORTRAIT OF DESPAIR | Meanwhile, in Boston, when not boinking Gloriana stand-ins or trashing a painting of his late father, Cotton answered his elders’ questions about the tragic events that unfolded in Salem and, for his efforts, was forbidden to return to the village. Later, we learned that the most inquisitive elder was in league with the powerful Countess Marburg (Lucy Lawless), who repaid his persistence with a gander at her naked body and a horrific supernatural death by bathwater.

WHO ‘WAR’ IT BEST? | Back in the woods just outside Salem, Mercy tried to impress the elder witches by taking control of various menfolk (by cutting off their peckers and replacing them with actual peckers — crows!). When the hags squashed her dream of replacing Mary as alpha female, the teen had her phantom henchwomen murder them and left a message for her maker in Salem’s town square: the word “WAR” — written in fire, no less!

OK, your turn. Did Salem‘s season premiere leave you spellbound? Vote below, then hit the comments.