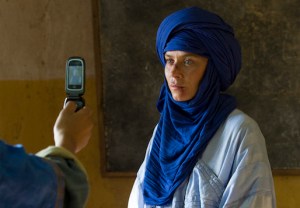 NBC launched Anna Friel on an American Odyssey this Sunday night — will you keep tagging along for the ride?

The midseason drama stars Friel (Pushing Daisies) as Sergeant Odelle Ballard, an American soldier who, in the midst of an unplanned takedown of Al Qaeda’s top commander, stumbles across enormously volatile intel — the transfer of $30 million from the American company “SOC” to a terrorist cell. Soon afterwards, private military contractors, OSELA, arrive to take out Odelle’s entire unit, though she secretly survives, the only witness to the massacre.

One ray of light in this dark scenario: Just before being captured by a local Mali tribe, Odelle sends off an email to Colonel Stephen Glen, revealing that she is alive. She then is locked up by her captors, but earns sympathy from the young man, Aslam, assigned to guard her, after she helps treat his friend’s burns. When OSELA then attacks the village, Aslam whisks Odelle away. After Odelle threatens to rat out Aslam to Ansar Dine (a militant Islamist group) if he leaves her behind, he agrees to bring her along, disguised as a man, on his tribe’s trek to Timbuktu.

But first, Odelle is allowed one call home, and for some reason she choose her house land line (because it’s 1998?), but it’s being watched/intercepted. Aslam then does Odelle another solid, by sending a picture of her to Al Jazeera, for instant, global dissemination.

Decker, while working on a merger involving the shifty “SOC” aka Societele Mining, discovers that they paid off a drone pilot named Gentry — who then labored to decline the payment. After Decker pays a visit to (and is quickly turned away by) Gentry, a goon spooks the guy’s family. Gentry then summons Decker back and admits that he was tasked to send armed drones to Mali — in and of itself an unusual request — and to fire on American soldiers. Alas, en route to give a deposition, Gentry is the target of a hit-and-run.

Meanwhile, at a G8 summit protest, Harrison meets Bob Offer, a hyper hacker who finds proof of the email Odelle sent to Colonel Glen — ‘cept Bob mysteriously goes missing at episode’s end, just as word spread that Ballard is alive, though the military spins the photo as propaganda.