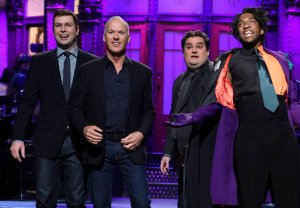 This just in: There are still a few scenarios in which Batman cannot save the day.

Keaton managed a few laughs here and there — his opening monologue fending off Batman/Beetlejuice fanboys Bobby Moynihan and Taran Killam was decent, and the demented final Easter-themed sketch worked mainly due to the host’s unhinged commitment (as well as an adorable baby chick). But the writing was so dismal in other instances that not even the entire Justice League could’ve done much about it.

Below, my picks for the night’s best and worst:

BEST: EASTER BASKET
Keaton’s serial-killer-y delivery as a dude going through the contents of an Easter basket — a sequel of sorts to an Ed Norton Halloween sketch, as one of my astute Twitter followers reminded me — was equal parts chilling and chuckle-inducing. Kate McKinnon and “a child chicken” added to the weirdness, but it was Keaton’s mix of the rageful (calling a candy Santa an “attention whore”) and the ridiculous (admitting his preference for hollow chocolate bunnies due to their sexual availability) that made this one hard to dislike.

BEST: SCIENTOLOGY PARODY
A 1990 “Church of Neurotology” music video — updated with chyrons about the grim fate of many of its participants — wasn’t subtle about its target (is it really masking anything to refer to Dianetics and Diametrics?). But “where are they now?” zingers like “in a hole,” “thrown off a boat” and “blackmails gay actors” gave this spoof enough teeth to deliver some true comedic bite.

WORST: AD AGENCY MEETING
Keaton looked occasionally embarrassed playing an ad-agency CEO sitting in on a pitch meeting and making inappropriate suggestions about the need for “huge knockers” and boner jokes. For no apparent reason, Keaton’s character was also bleeding profusely from the stomach — due to a navel-piercing gone wrong — but this absolute turd of a sketch bled out long before the star’s grisly wound brought the scene to a mercifully abrupt end.

WORST: “SMART HOUSE” NEIGHBORS
Keaton and Cecily Strong played an “inventor” husband and a supportive wife championing his ideas for products like a “Smart Couch” that places a tube up a person’s rectum — in order for the furniture to identify and greet the guest in question. Since typing the prior sentence has prompted a new wave of shame for not promptly switching channels, I’m gonna cut this description short. (Side note: I need to tip my hat to Kate McKinnon’s “We should probably be going: We left our baby in the tub,” as the sole genuine LOL moment in the entire sketch.)

Your turn. What did you think of Michael Keaton’s SNL hosting gig? Take out poll below, then sound off in the comments! 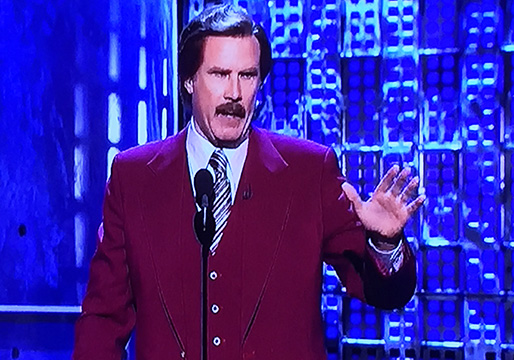