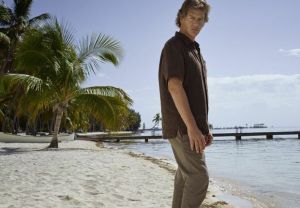 THE PERFORMANCE | We never thought that anyone could steal the spotlight from the man who gave life to our beloved Coach Eric Taylor, but in the first few episodes of Netflix’s dark drama of family dysfunction Bloodline, a relative unknown (in this country, anyway) has done exactly that. Emmy winner Kyle Chandler may be the star of this engrossing new series, but Mendelsohn is its breakout performer.

In early episodes the Aussie sensation keeps us guessing. It’s tough to tell if his complex character – beaten down Danny Rayburn, an increasingly desperate man trying to reconnect with a family that continues to reject him – is the product of his upbringing or a genuine bad seed. Explaining to his scornful father why he has come home, Danny calmly asserts, “I thought we could work things out before you die.” It’s the stuff of a stage play by Sam Shepard, which makes the acclaimed playwright’s portrayal of Danny’s distant dad and Mendelsohn’s enthralling work opposite him all the more resonant.

When his guard is up, the tragic Danny is not very likeable or sympathetic at all. But when Mendelsohn lets his sadness and pain show through the impact is heartbreaking.

What really makes Mendelsohn stand out from the outstanding cast around him is that he plays Danny on a deeply internal level. (Even when he wakes up naked on the dock at his family’s waterfront resort in clear view of startled guests he barely reacts.) Still, there is no doubt everything that happens to him leaves a mark. Mendelsohn is a marvel at revealing a lifetime of misery in the subtlest of ways: It’s as if every awful thing in Danny’s past and present (and every bad thing we see coming in his future via scattered flash-forwards) is right there in his eyes, reflected back at everyone around him. We can’t look away.

HONORABLE MENTION | Jules Kiki Cobb is many things: a wife, a giver, a red wine enthusiast… but above all else, she’s a mother — not just to Travis, but to the entire Cul de Sac crew. In Cougar Town‘s series finale, Jules’ desire to keep her tight-knit surrogate family close and lavish them with love gave Courteney Cox an excellent final showcase as she feared everyone was moving on without her. Though the ABC-turned-TBS comedy became less a starring vehicle and more of an ensemble effort, Cox was the glue that held the chaotic half-hour together for the duration of its run, and as its final installment came to a close, perfectly embodied the happy-go-lucky personality of the show itself.

HONORABLE MENTION | For Chi McBride‘s Hawaii Five-0‘s character, it was the best of times, and it was the worst of times, when Grover’s longtime friend Clay paid a visit. For no sooner had the former colleagues reunited than Clay’s wife tragically tumbled off a cliff – leaving Grover to suspect the worst. As Grover grappled with his gut instinct and butted heads with his Five-0 brethren, McBride made evident the conflict between friend and lawman, fearing yet steadfastly believing in a hard truth. McBride especially shined during Grover’s confrontation with Clay, then sealed his Honorable Mention with a sudden breakdown in his wife’s arms, proving that sometimes, yes, big guys do cry.