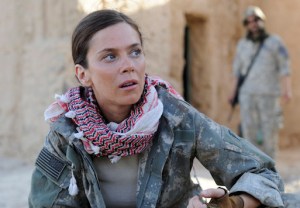 When NBC’s Odyssey recently tweaked its title to American Odyssey, some joked that the ancient Greek poet Homer had filed suit for trademark infringement.

But make no mistake, the midseason thriller (premiering Sunday at 10/9c) is inspired by the epic poem.

As series co-creator Peter Horton explains, “Three-and-a-half years ago, I had been working with my writing partners, Adam Armus and Kay Foster, on a different project that didn’t work out, so we were looking for something else to do. [British producer] Simon Maxwell came to us and said, ‘It might be fun to do a modern take on The Odyssey,'” Homer’s epic poem about Odysseus’ long, tortured journey home to Greece after the fall of Troy. 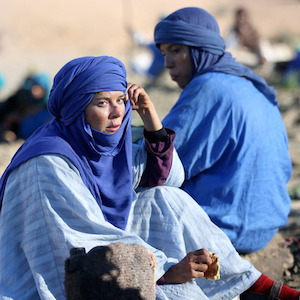 “We were like, That’s sort of a weird idea — we weren’t that interested in Cyclopes and Sirens,” Horton continues, “but when you boil it down, The Odyssey is kind of an achy story about trying to find your way home. That appealed to us, so we started to vamp on it.”

Horton, Armus and Foster merged that crumb of an idea with the hot topics of the time — the Occupy movement and military action in Pakistan and Afghanistan — only to have to update their premise years later, as the project came to fruition. The resulting drama stars Anna Friel (Pushing Daisies) as Sergeant Odelle Ballard, an American soldier who, in the midst of a SEAL Team Six-like takedown of an Al Qaeda leader, stumbles across volatile intel. Soon after, private military contractors arrive to take out Odelle’s entire unit, though she miraculously, secretly survives. Odelle then labors to get word out that she’s alive, all while eluding capture on the outskirts of northern Mali.

“Everything just evolved,” Horton says of the series’ final set-up. “Occupy kind of went away, and the activity in Northern Mali, and Libya, and Algeria and now even Tunisia, became a new fertile ground for terrorism.” Then, spurred by Armus and Foster’s work on Heroes, “It seemed like the best way to approach this story 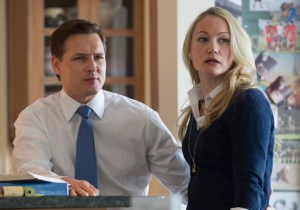 would in a trifurcated away, as opposed just one story.”

Thus, back in the States, corporate litigator Peter Decker (Nurse Jackie‘s Peter Facinelli) and activist Harrison Walters (Jake Robinson, The Carrie Diaries) get pulled into the deadly conspiracy that has put a target on Ballard’s back. Treat Williams (Prince of the City) meanwhile costars as the colonel whose allegiance to Ballard perhaps cannot be trusted.

Though American Odyssey is touted in press materials as being “Traffic-like” (as in the 2000 Steven Soderbergh film starring Michael Douglas, Catherine Zeta-Jones and Erika Christensen), the international conspiracy/”Who can you trust?” elements certainly evoke the underpinnings of a typical 24 season — a juxtaposition Horton welcomes.

“There were screenings around the country for female vets [on March 25], and we heard that from a couple of people in the audience,” Horton, who also directed the first two episodes, shares. “They felt like it had a similar ring to 24, and I don’t mind that comparison at all.”

But where 24 had rugged Jack Bauer as its tireless hero, American Odyssey went a perhaps unexpected route in casting the resilient Sgt. Ballard. “Casting Odelle was its own odyssey,” Horton recalls. “We looked at a number of well-known actresses, and when Anna Friel’s name came up, it was like, ‘Oh, that girl from Pushing Daisies? I don’t see her doing this.” As the EP explains, “She’s small” — 5-foot-2 by some accounts — 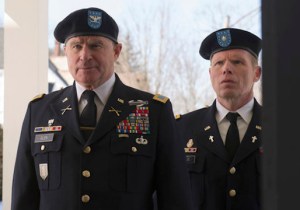 “and you always think that this has got to be a fierce character, but she actually was willing to audition for us, and we really pushed her. And she did such a good job that we thought, ‘OK, we’re going to take a chance on her, because she is such a good actress.”

As viewers will see on-screen, that gamble paid off. “What she brought to this has just been inspiring,” Horton raves. “She [an English actress] not only brought an American accent, French, and Arabic that she learned phonetically, perfectly, she also worked out with a military trainer from the beginning, doing sit-ups in the rain in London getting ready for this part. She totally committed herself to it.”

In retrospect, Horton appreciates the added impact of going with someone unassuming versus, say, a Katee Sackhoff type. Likening Friel to “Mighty Mouse,” he hails the actress’ “fierce interior, which is really much more interesting to watch, as opposed to someone who’s got an overt one.”

When all is said and done, what does Horton hope people take away from American Odyssey? “What this story is about is power,” he says. “Who’s got it in this day and age? And even in a democracy as sophisticated as ours, do we still have power?” As he reminds, “This is not a CIA show, or an FBI show, or a cop show. It’s about three normal people who see something that they believe is wrong going on, and they try to exercise their individual power to affect it, and change it. And hopefully that’s what people will be asking out of this. Do I, as one of the citizens united, still have power?”