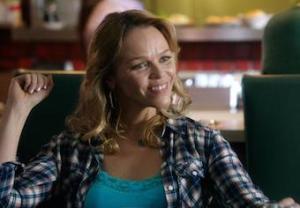 This week on ABC’s Scandal, Jake looked bloody guilty, aspiring senator Mellie nearly got kinfolk’d over and just as Olivia began moving on into the future, she got a blast from the past.

Scandal has never been an easy show to recap, make no mistake. The end of Season 1, all of Season 2, patches of Season 3… there was so much going on, it was a skill to in any way capture it all, to condense those visceral thrills with mere words.

And then there’s the other kind of “hard to recap,” when an episode is largely a series of moments segregated into a few separate bowls.

That was the case here, with the only partially realized tale of Mellie’s black sheep half-sister, the latest chapter in the B613 story that refuses to die, and a Case of the Week that wasn’t so much magestically handled but merely managed.

HALF-SISTER ACT | LizzieBear goes to vet Mellie’s (half-)sister Harmony, and comes away with a bad vibe, that Harmony is “fifty shades of angry” and ready to burst to anyone within earshot. Mellie is tasked with inviting Harmony to the White House, but the dinner she strong-arms Fitz into joining them for is an all-out disaster, its darkest point coming when Mellie calls Harmony’s mother a w-h-o-r-e. Afterward, over hooch, Mellie expresses her disappointment to Fitz that he didn’t assume the “First Lady” role at dinner and diffuse the situation with a chipper anecdote. So Fitz meets with hot-under-the-collar Harmony before she leaves and explains/fibs that Mellie is merely jealous of what Harmony has, and redirects her hurt outward. Harmony falls for it, bids Mellie adieu with a hug, and Fitz later assures Mellie, “You’re going to win this race, and I’m going to be ride at your side when you do.” So, not only were we subject to the cartoon-like, please-some-Southerner-confirm-it-was-offensive portrayal of Harmony, but whatever old “dirt” she had on Mellie, we got no whiff of. The first great threat to Mellie’s political career was neutered with an easy lie. 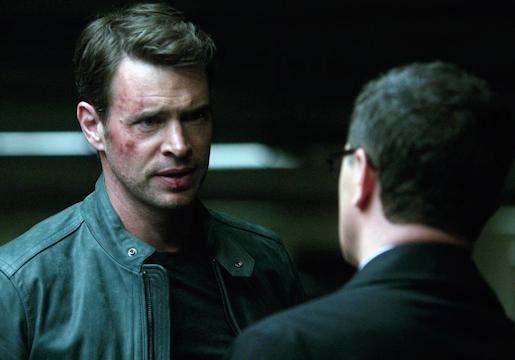 unsuccessfully bids to get Jake to testify against B613, the onetime Command appears to fly off the handle and go on a rampage — leading to his seeming slaughter of three other B613 agents David was able to corral, followed by a tussle with Charlie. Desperate to make his case, and with Jake on the loose, David realizes that he himself can testify, having eye-witnessed Ballard’s killing of James Novak and those two other people. It all leads to a tense moment in a parking garage, where Jake approaches David with gun drawn… only to shoot David’s mild-mannered assistant Holly, who actually was B613 and about to kill her boss. (I always loved that moment in The Sting, too.) Jake warns David that there will be others out there with him in the cross hairs, so they must tread extra-carefully, while Olivia chews out Huck for keeping their concerns about/surveillance of Jake a secret.

HEAVENLY FATHERS | Olivia takes on a case of Nick Reed, a congressman who insists that his father George was wrongfully arrested and put on Death Row for the murder of the predatory math teacher who caused his 14-year-old sister to hang herself. In the hunt for an alternate suspect, Huck and Quinn snoop around the house of the teacher’s recently deceased wife, where they find stashed the  murder weapon. Olivia reports back to Nick that the gun was planted there — by him, and it comes it that George forbade his son from taking the fall for the much-deserved dispatching. When Liv points out to George that Nick has been trapped in this lie for 15 years, the dad allows his son to confess at a presser, with the promise that Liv will do her very best to salvage what she can of his image.

With that behind her, Liv is at home when the doorbell rings, and it’s her lover, (Franklin) Russell… accompanied by Rowan, who surely has something to say about the plan to destroy B613.

What did you think of the episode “Honor Thy Father”?