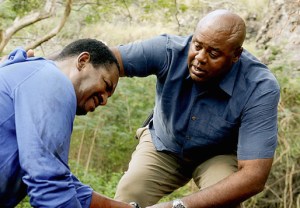 Though the weather is a marked upgrade from, say, where Human Target was filmed (“It only rains twice a year in Vancouver: once for five months, one for four,” he quips), Hawaii Five-0‘s idyllic setting is almost inconsequential to Chi McBride‘s enjoyment of his latest TV role.

“I’m always having a good time doing a show. Well, I take that back — there was one time I didn’t,” the veteran actor reports with a chuckle (and without naming names). “But I like to have fun, man. Because at the end of the day, we’re not pulling a grapefruit-sized tumor out of some kid’s head. If you can’t have fun making a TV show, what’s the point?”

McBride’s extensive TV resume includes runs on UPN’s short-lived The Secret Diary of Desmond Pfeiffer (headlining as President Lincoln’s butler), The Nine, Pushing Daisies, House and CBS’ one-and-done Golden Boy. He made his debut on CBS’ Five-0 — as Chicago-born SWAT team boss Lou Grover — in September 2013, and was upgraded to series regular not long after.

In the show’s most recent finale, after Grover was forced into retiring from SWAT, he was promptly met by Steve McGarrett’s offer of a job with the Five-0 team. As such, he now gets to run-and-gun regularly alongside Alex O’Loughlin, Scott Caan, Daniel Dae Kim and Grace Park. 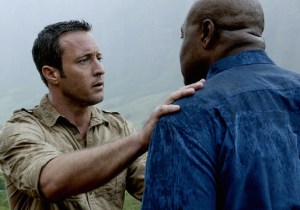 In this Friday’s episode (CBS, 9/8c), McBride’s character steps to the fore when the wife of a visiting, longtime friend (played by Justified’s Mykelti Williamson) suffers a fatal fall while out hiking. It’s a tragic accident that, to hear one man tell it, perhaps wasn’t.

“It may not be what it appears to be,” McBride says of Grover’s surprising and unpopular POV. “There may be more to it, so I start pursuing it as a crime, yet nobody thinks it’s going anywhere. And it evolves into something that Grover never expected.”

The mystery’s unexpected path paves the way for some compelling, emotional monologues from McBride, capped by a closing scene featuring Grover as you have never seen him before. Yet even after the screen fades to black, the actor teases, the intense storyline “is not over. There’s much more to it.”

McBride shrugs off the import of Grover-centric storylines, noting, “I’ve been doing this for 25 years, so I’ve had a lot of opportunities to do some cool stuff, with some really good writers — and [Hawaii Five-0 showrunner] Peter Lenkov is no exception to that. Hawaii Five-0 is an action-adventure series and we don’t make these kind of departures often, but this is one of those times.”

Besides, he repeatedly states, “The work is the work,” elevated largely by those you do it with — another aspect in which Five-0 excels, he says.

“I’m not one of those ‘What’s my motivation? Where’s my truth?’ actors,” McBride confesses. “It’s all pretend, so I try to have a good time wherever I go. But it really is a gas to be working on this show. Interacting with the people, with the cast and crew, and what goes on between set-ups… That’s the fun I’m talking about. I try to choose my jobs based on the potential of the material, and the rest of it is working with good people.”