Starz is ready to bare its Ash.

The premium cabler on Thursday unveiled the first teaser trailer and artwork for its upcoming Ash vs. Evil Dead series, a followup to the Evil Dead horror-movie franchise.

Bruce Campbell will reprise his role in the half-hour show as Ash Williams, who must get back into the monster-hunting business after a Deadite plague threatens all of mankind.

Press PLAY on the video above for a brief glimpse at the sequel series, then scroll down to see the accompanying poster: 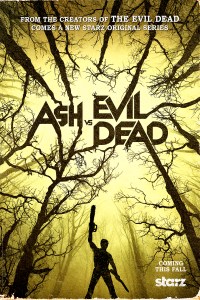 * Anna George (Royal Pains) has been tapped to guest-star on New Girl, playing Cece’s mom in an episode of the show’s recently announced fifth season, per The Hollywood Reporter.

* Netflix has greenlit eight hourlong episodes of Montauk, a 1980-set drama series following the mystery of a young boy who vanishes into thin air, Deadline reports.

* Speaking of awards: Portlandia star Fred Armisen will host the Peabody Awards ceremony on May 31, per Deadline.

* CMT announced Thursday that it has ordered five new series, among them The Josh Wolf Show (a nightly talk show exec-produced by Chelsea Handler), Still the King (a scripted series starring Billy Ray Cyrus as a washed-up country musician who reinvents himself as an Elvis impersonator) and I Love Kellie Pickler (a docuseries following the American Idol alumna’s marriage to Kyle Jacobs).