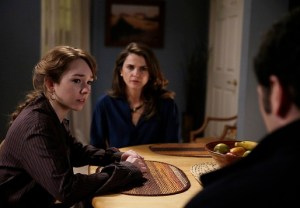 Kids, they grow up so fast… and become junior spies?

On Wednesday night’s The Americans, Paige confronted her parents about what they’re hiding and — shocker! — Elizabeth and Philip actually told her about their espionage-filled lives.

Offscreen, her portrayer Holly Taylor was as desperate as her alter ego for the truth to come out. “I just wanted her to find out already so she can be a spy!” she tells TVLine. “That’s like my main goal. So I was so excited when I saw this script.”

“I just think it would be so much fun,” Taylor continues. “It would be cool if their family business was spying and wearing disguises. It would make for an interesting Christmas card. I’d love to wear disguises and do stunt work, all that crazy stuff that they get to do. It’d be a really cool storyline.”

But before Paige can join her parents’ cause, she has to deal with the aftermath of their revelation.

“She’s not sure at this point if the truth is really what she wanted to hear,” Taylor says. “She has a lot more questions. She’s had more time to think about it by the next episode. She’s going to be persistent and keep up her guard because her parents are like new people to her.”

Below, the actress talks about Paige’s possible covert future and whether she’ll spill Philip and Elizabeth’s big secret to her Pastor.

TVLINE | Now that Paige knows the truth, is the second-generation legals program something that they’re talking about within the family?
Since the end of Season 2, their intent was trying to recruit Paige eventually. Now that she knows, that definitely comes up. But also, it’s just trying to settle Paige into the fact that they are spies and getting her to adjust and absorb all this information first.

TVLINE | They’ve been lying to her for a very long time. Does this drive her further away from her parents and toward the church? Or do you see her coming around to understanding what her parents are trying to do?
Paige doesn’t really know where she wants to go with this information. The church has always been the place where she feels the most secure, and she knows exactly what’s going on around her as opposed to when she’s at home, [where] she has so many questions. She’s curious and not necessarily driven away from her parents because she wants to find out more about it to really understand and not be in the dark anymore. So Paige is just lost in the middle of it all and trying to figure it out. 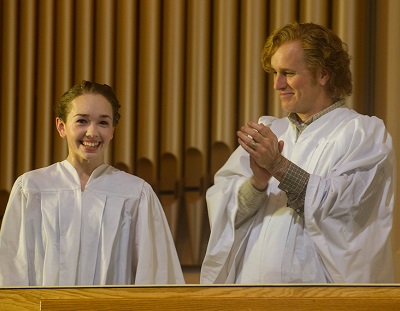 TVLINE | It seemed like she wanted to tell her pastor what was going on. Was that the impression you got from the script?
Yeah, definitely. Like I said before, Paige feels safe with Pastor Tim and his church. So it makes sense that he would be the person she calls when she finds out news like this. But she also has the weight of her dad saying that they could go to jail forever if anyone finds out, so she’s conflicted between those two and doesn’t know what the right thing to do is.

TVLINE | They gave her a very clean-cut version of what they do. How much does Paige really grasp about their work?
She’s had so many questions in the past, and she’s had so many theories about what they could be hiding from her. At this point, this is just so random and so out-of-the-blue that she doesn’t even understand the extent of it. So she’ll have to dig further to find more information and really find out what her parents are up to.

TVLINE | At the end of the episode, she’s also looking at Stan like he’s a new person to her. Does she think they might be using him? Or is she now having doubts about who Stan really is?
She thinks that they’ve been using him. That’s something that’s very messed up to her that this spy is a part of the FBI, he’s their neighbor, he could prosecute her parents for what they do, and to have him over for dinner so casually and laughing with him and be so friendly is almost disturbing to her. That’s another load for her to put on her plate is this role that her parents play with the people around them.