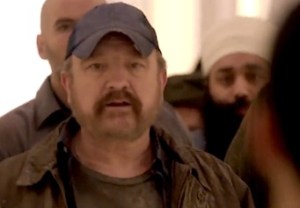 Heaven isn’t all it’s cracked up to be for Bobby Singer.

On Wednesday’s Supernatural (The CW, 9/8c), fan favorite Jim Beaver reprises his role as the Winchesters’ beloved, deceased father figure when Sam and Castiel seek out his help.

Bobby’s all for getting back in the game since the afterlife isn’t, well, quite as heavenly for the hunter as Beaver imagined it would be, the actor tells TVLine below. He also previews Bobby’s worries about Dean’s Mark of Cain plight and reveals the kind of episode for which he’d like to return.

TVLINE | Are you surprised they’re still finding ways to bring you back?
No, I’m usually surprised they haven’t found more. Various writers have told me that they’re always keeping an eye open for potential Bobby episodes. It’s just a matter of being true to the mythos of the show, being true to the show’s natural rules. But I think they always welcome a chance to have [Bobby] back for a bit. I, personally, welcome any opportunity. I really love the character, and I really love playing him and I love playing with the guys. It’s a great gig, and I miss it when I’m not there.

TVLINE | When you got the script for this episode, was there anything about Bobby’s storyline that surprised you?
I haven’t seen any of the episodes that take place in Heaven. It was kind of revealing to me to find out what Bobby’s Heaven is like, what he’s been doing and how he feels about being there. So I wouldn’t call it surprise, but it was very informative. I look at it and I go, “Well, I’m not sure that would be my idea of Heaven.” But everybody has their own in the Supernatural universe, each Heaven is designed specifically for the person. Maybe it’s natural that Jim’s idea of Heaven wouldn’t be the same as Bobby’s.

TVLINE | Last time we saw Bobby, it wasn’t really him but a manifestation of Sam’s subconscious. So now that we’re actually seeing him, how is he faring? Is he happy in Heaven?
I think he’s a little wistful. He’s content, but he kind of misses being on the hunt. My sense is that Bobby misses the old game and misses the danger and the adventure of it. I know he misses the boys. But I guess if you’re going to go to Heaven, you’ve got to take some bitter with the sweet. [Laughs]

TVLINE | Is there any love for Bobby in Heaven? He had a wife that he really loved who died… Is that mentioned?
It’s not addressed in this episode, no. Interesting question. That would actually be kind of cool. I guess Karen Singer’s got her own Heaven somewhere and maybe it doesn’t include picking up after Bobby. [Laughs] But I know he’d love to see her again.

TVLINE | Sam and Cas need Bobby’s help. What can he do for them all the way from Heaven?
There are doors and keys and access and resources that reside only in Heaven and only somebody who’s already established there can make use of them. So Sam and Cas have to reach out to somebody, they have to find an “inside man.” Who better than the guy they know? They probably know some other people in Heaven, but you always look for help from the people closest to you.

TVLINE | What does Bobby make of Dean’s situation with the Mark of Cain?
Oh, he’s just delighted by it. [Laughs] No. He’s very concerned and certainly Bobby and Sam have a very serious discussion about how to resolve the issue with Dean. And I think Bobby’s very frustrated, being at a distance from the situation. I really feel like in Bobby’s real Heaven, he’d be jumping back in with both feet into the mess that Dean is in. 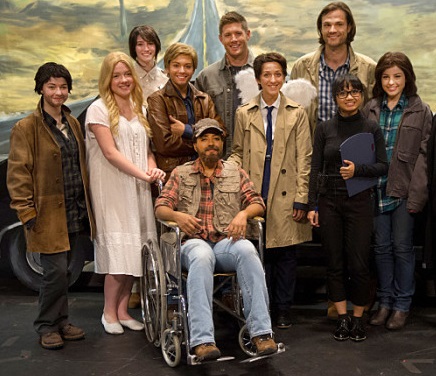 TVLINE | Did you get a chance to watch the 200th episode and their homage to Bobby?
I did, and I thought that was pretty cool. I thought Bobby looked prettier than usual. That was a fun episode. Every season, they do one or two or three really fun episodes — fun in the sense that it must have been really fun to shoot — and I’ve managed to miss a lot of those. I missed “The French Mistake.” The one where things get a little wacky, I would really dig being in one of those. I love the ones where it’s pure adventure or pure heart and all of that. But if there’s anything I’ve missed over the 10 seasons, it’s been getting to be in the really offbeat ones.

TVLINE | Have they talked to you about bringing you back yet again?
They haven’t specifically said anything about anything more, but I do know that they’re very fond of the character and they’re always looking for a way to make use of him in a way that fits in well for the show. So I have little doubt that I’ll be back as often as it’s practical.