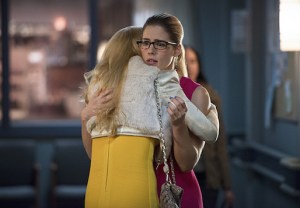 This week’s Arrow was greater than the sum of its parts, since the timing of Ray’s hospitalization kept Felicity on an “island” while a citywide manhunt was underway for the Arrow — and then Oliver himself.

MATTERS OF LOVE AND DEATH | After Mayor Castle got shot dead by Maseo, Ray took an arrow for Felicity, resulting in a thrombus. To attempt surgery right away would be to risk Ray’s life, while to wait could result in brain damage. Ray, though, has some nano-tech that might save him, but the (remarkably unimpressed, unfazed) doctor says that hospital policy forbids experimental treatments.

Visiting Donna Smoak gives her daughter a pep talk, saying that it’s up to her to inject “those nano-thingies” into her boyfriends — and to that end, Donna later distracts the doc with “back spasms” while Felicity slips Ray the nano-tech. A few convulsions later, Ray is fit as a fiddle… and telling Felicity that he loves her. Felicity doesn’t know what to do with that admission, even though it came from a “brilliant” Doctor Who fan who looks like a “Disney prince,” but Donna knows why: because Felicity is in love with Oliver, something her mother deduced five seconds after seeing them together. But, Felicity notes, Oliver is “terminally unavailable” — especially as the target of a manhunt that neither Donna nor Ray caught wind of via the news or gossip among the orderlies…?

NO, YOU HAVE FAILED THIS CITY | A rampaging Lance has issued first-degree murder warrants for the Arrow and reinstated the anti-vigilante ask force. Oliver needs to track down Maseo and stop  the frame job, but Nyssa — spurned daughter or not — will only go so far as to deliver an address. That leads to a rooftop fight with Maseo and others, which is quickly enough interrupted by Ra’s… who brought hovering police choppers with him. Oliver escapes, Roy gets left behind (again, but turns up A-OK later), and Laurel gets cornered by no less than her own Daddy, but Nyssa pops up to waylay the captain.

If only Lance’s woes ended there. Soon after, he is abducted by Ra’s, who arms the captain with the Arrow’s true identity and the fact that Oliver and Sara used to hang out on Lian Yu. Lance later resurfaces at the cop shop where he argues to Laurel that this whole “masks” thing started with Oliver Queen. And while he denies that the sole reason for his vendetta is Sara’s death, Lance does see some irony in the fact that it was his youngest daughter’s boat trip with Oliver that ultimately led her to the League of Assassins. (As for him knowing Oliver’s secret, Lance says what we hoped to hear: “On some level, I think I always knew.” Whew.)

Lance wastes no time outing Oliver to the entire city — leaving Oliver, in his mind, no option but to turn himself in, which he does in trade for full immunity for the rest of Team Arrow. “I’ve been through far worse than prison,” he tells Diggle et al. Since they followed him this far, through so much already, he implores them to “follow me just a little further, until it’s over,” believing as he does that Ra’s al Ghul’s only remaining play is to tell the truth. Team Arrow, however, has other ideas….

Inside the prison transport, Lance lashes out at Oliver, recounting all the misery (e.g. Slade Wilson) he brought back from the island with him, and all of the loved ones (Tommy, Moira, Sara…) who died as a result. Shooting down Oliver’s mission statement, Lance posits, “Saving people isn’t really your specialty” — rather, the city may have been better off if Oliver died on the island! Ouch. Over the past two years, “You made us liars, and victims,” Lance continues. Thus, “You’re not a hero. You’re a villain.” The harangue is cut short by an attack on the transpo, by Roy, who using Oliver’s costume and voice changer declares himself to be the Arrow — to what possible, sensical end, I can only wonder — and surrenders.

IN FLASHBACK… | Picking up where the last Hong Kong flashback left off, Oliver has bumped into Shado…‘s twin sister, Mei, who provides him and Akio shelter at her place. Oliver tries to pass himself off as a med school pal of Shado’s, but his matching tattoo tells a different tale, so Mei calls the cops. Baddies come calling instead, but Oliver (with an assist from Maseo and his wife) survives the assault. Afterward, he admits to Mei that he very much knew — and loved — her sister, and that both Shado and their father, Yao Fei, are gone. Mei, having spent three years not knowing her family’s fate, thanks Oliver for resolving this mstery, no matter how tragically, once and for all.

A FEW WORDS ABOUT FELICITY’S FATHER | As with Donna’s first visit, he came up. And again, we were only given crumbs. But hey, with raindrops you fill buckets. This time, Felicity finished Donna’s sentence, “If your father were here…” with “…he’d be arrested,” which is, you know, something. Also, Donna gave us a peek at her ex’s value system, in that he’s the type to “take a chance” when it comes to loved ones. And lastly, Papa Smoak apparently tinkered with electronics kits when Felicity was a moppet.

What did you think of the episode “Public Enemy,” Donna’s advice for Felicity, and Roy’s sacrifice there at the end?