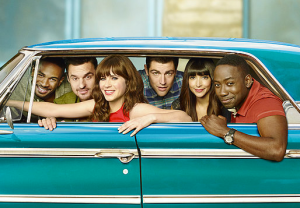 Fox has renewed the Zooey Deschanel comedy for a fifth season, TVLine has learned.

Oddly enough, the pickup comes as work on Season 5 is already underway. The show remained in production after wrapping Season 4 in order to get a jump on Season 5 ahead of Deschanel’s maternity leave (the actress’ pregnancy is not being incorporated into the show).

Meanwhile, TVLine has exclusively learned that at least one (but likely more) of those Season 5 episodes will feature a guest turn by John Cho. The Selfie and Sleepy Hollow vet will play a guy Jess meets when she excitedly reports for Jury Duty. SNL‘s Taran Killam is also set to guest star, as we reported last week.

“Four seasons in, New Girl continues to be one of the smartest and most relatable comedies on television,” said Fox entertainment president David Madden. “The writing is razor-sharp, the ensemble is consistently hilarious, and we couldn’t be more proud of… the entire New Girl team. We absolutely love this show and we’re so excited to bring it back for Season Five.”

Fun fact free of charge: The series will celebrate its landmark 100th episode during Season 5.