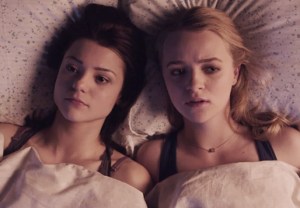 It’s a good thing Tuesday’s Finding Carter season premiere was only a one-hour affair, because I’m not sure my imaginary ovaries could handle any more excitement.

Picking up just four hours after Carter’s (second) kidnapping, the episode gathered Lori, Carter, Elizabeth and Taylor together as part of a sting operation, where Lori dropped this little bombshell on the unsuspecting sisters:

“I need you to know I’m not the bad guy here,” she began. “I am your real mother. And Taylor’s mother, too.”

The craziest part? She was telling the truth! Elizabeth and David were unable to conceive on their own, so they received an anonymous egg donation from Lori. Things apparently got messy when Lori tried to contact the happy couple — a fact Elizabeth claims to know nothing about — which led to Carter’s (first) kidnapping.

Lori was eventually apprehended — by a surprisingly aggressive David — but not before planting this little seed of doubt in the garden of Elizabeth’s mind: “It’s not the whole story. I know the truth about the egg donation. If you don’t believe me, ask David. He knows other things, important things you would want to know. … I am not the only one to blame here. David did a number on both of us.”

I guess even without his book deal, David remains the shadiest member of the Wilson family. What is he hiding this time?!

But the episode wasn’t all about secrets and lies; within the first few minutes of the premiere, Max and Taylor decided that breaking up had been a terrible mistake — so bring on the croutons! Also, was anyone else taken aback by Grant’s growth spurt between seasons? (Longest four hours ever.)

Finding Carter fans, what do you think David is hiding from Elizabeth? Are you feeling at all sympathetic for Lori? (I think we’re supposed to, but I can’t say I am.) And how happy were you when Max and Taylor reunited? Grade the premiere below, then drop a comment with your thoughts and theories.