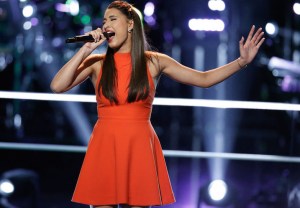 Pharrell Williams can do no wrong in my book — although he came pretty darn close when he anthropomorphized musical notes during the final night of The Voice‘s Season 8 Knockout Rounds.

“Cracking doesn’t mean you hit a bad note,” declared the Coach Most Likely to Be Confused With Yoda to his obvious favorite contestant Lowell Oakley. “It means you’ve given up on the note — and left it out there by itself.”

Oh, no! What about the notes? Who’s going to speak out on behalf of the poor defenseless notes? #JusticeForTheNotes

OK, OK, I’ll stop being a goofball and talk about what actually went down on the last pre-taped installment this season. You’ll be shocked to learn that the sole remaining Steal was held ’til the episode’s final segment and was spoiled well in advance during the “coming up after the break” interludes. (Urgh! Why do Mark Burnett & Co. continue to hold on to the baffling belief that suspense lies not in which contestants will be stolen, but which coaches will be the beneficiaries of such moves?)

And while I’m not sure any single performer lived up to the insanely high standards of last Monday’s proceedings — you remember, the one with Kimberly, Koryn, Sawyer, Mia, Sonic, Sarah and Meghan? — we definitely unearthed two or three more legit contenders for Craig Wayne Boyd’s crown.

With that in mind, let’s get to ranking the night’s six Knockout pairings in order from least- to most-promising winner:

6. TEAM PHARRELL: Lowell Oakley – “My Girl” defeats Jacob Rummell — “Life of the Party” | Lowell busting out in laughter midway through the opening verse — which came across as an unhinged error rather than a deliberate artistic choice — was perhaps the strangest moment of the Knockouts, and his face-touching, overly theatrical vibe made him the clear loser of this matchup. Sure, Jacob’s not-quite-steady pitch and insipid delivery weren’t significantly superior, but at least those blunders didn’t leave me wanting a Silkwood shower. Lucky for Lowell, then, that his coach seems more obsessed with him than your average 11-year-old girl with the uncertain fate of One Direction.

5. TEAM BLAKE: Brooke Adee – “Electric Feel” defeats Kelsie May — “Tim McGraw” | The biggest mismatch of the night found Kelsie’s nervous quaver and gruesome glory notes making Taylor Swift’s original sound like a Jessye Norman aria. Brooke would’ve had to pause her performance and burn the debut CDs of Danielle Bradbery, The Swon Bros and Cassadee Pope in order to see the win slip through her fingers. As it turned out, her completely competent (if somewhat soul-free) MGMT cover was more than enough to seal the win.

4. TEAM XTINA: Rob Taylor – “Love and Happiness” defeats Treeva Gibson — “Chasing Pavements” | Wait, did I call Brooke-Vs-Kelsey the night’s biggest mismatch? Because on second thought, perhaps I should’ve given the honor to Rob-Vs.-Treeva? His opening riff on Al Green’s buoyant jam was so scintillating, and the remainder of his performance so solid (save for that hunched-over stage stance), it left Treeva almost no margin for error. So when her attempts at recreating Adele’s runs proved as successful as a Kardashian performing Shakespeare, it paved the way for Xtina’s easiest call all season.

3. TEAM XTINA: India Carney – “Big White Room” defeats Joe Tolo — “One of Us” | Future Voice contestants wondering about the difference between beautifully theatrical and painfully theatrical need only compare India to the aforementioned Lowell. Whereas the latter singer was presenting a mess of cheesy gestures and forced facial expressions, India anchored all of her drama in palpable, authentic emotion. Her “I’m goin’ crazy” refrain was like a vessel transporting viewers inside a padded room with her romantically tormented heroine. Yeah, Xtina ought to encourage her to give us 25% less vibrato — not every note needs to be sung like girlfriend is sitting atop a washing machine on spin cycle — but the way she phrases a lyric and throws her whole body and soul into the mix is damned impressive. As for Joe… sorry, buddy, you’ve got a pretty voice, but by Wednesday morning, I’m afraid I’ll have already forgotten your painfully earnest recitation of Joan Osborne’s quirky meditation on religious faith.

2. TEAM ADAM: Tonya Boyd Cannon – “I Wish” defeats Barry Minniefield — “What You Won’t Do for Love” | Barry’s old-soul stylings were groovy, but proved no match for Tonya’s muscularly groovy Stevie Wonder cover. The way she rode the pocket — and the way she put a little extra stank on lines like, “Smokin’ cigarettes and writing something nasty on the wall, you nasty boy” — proved utterly delightful. I wish she’d kicked off her movement-constricting heels and gone barefoot (or chosen flats), allowing her physical presence to match the flow of her vocals. But she didn’t miss a single note of a song with a high degree of difficulty — and her riffs and runs struck just the right balance between tasteful restraint and full-fledged peacock.

1. TEAM ADAM: Joshua Davis – “Arms of a Woman” defeats Lexi Davila – “Anything Could Happen” (Lexi stolen by Xtina) | I’m never big on coaches calling each other stupid — even in jest — but what was Adam thinking pitting two of his strongest artists against each other? (#HeActuallyWasKindaStooopidHere) Joshua’s take on Amos Lee was a whispered revelation — thanks to a tone filled with vibrant color and character and an innate ability to wring every bit of emotion from every word that passed through his lips. In a season filled with big, brassy female voices, Joshua’s delicacy could prove a popular destination for voters. Lexi, meanwhile, sounded kinda rough in her rehearsal package, but transformed from timid robot to a very alive young woman the minute she hit the big stage. I liked how her voice bloomed right in time with the build of the lyrical story — and that monster run toward the end was as impressive as any vocal trick employed in this deep, deep Season 8 pool. Xtina’s never won The Voice before, but if she doesn’t botch song choice for Lexi (and Kimberly, Sonic, India and Rob), she could be helping hoist a trophy come mid-May.

Your turn. What did you think of the final night of the Season 8 Knockout Rounds? Who were your faves? Did the coaches get it right? Take our poll below, then expand on your thoughts in the comments!