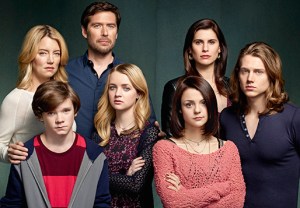 MTV’s Finding Carter returns for its second season Tuesday (10/9c), and star Kathryn Prescott tells TVLine that the show’s new tagline — “the truth will tear you apart” — isn’t to be taken lightly.

“It’s a truth that involves everyone,” Prescott says. “Some people already knew about it, but others didn’t, and it’s going to tear everyone apart in different ways.”

Below, Prescott and co-star Anna Jacoby-Heron preview more Season 2 twists, including Lori’s “sensical” plan, Crash’s surprising return and a few newcomers we should keep an eye on.

MAX & TAYLOR’S FUTURE | As you might have seen in the first eight minutes of the premiere, Max and Taylor do get back together — but that doesn’t mean the couple is totally out of the woods just yet. “It seems so simple, but there are a lot of themes that play into whether or not the relationship will stick,” Jacoby-Heron explains. “They love each other, so they want to be together, but they still have a lot of issues to work out.

LORI’S PLAN | Lori has always seemed like a bit of a nut job — an impression that only strengthens as she attempts to drag Taylor into her twisted plan in Season 2 — but could there also be a method to her madness? “She believes, for whatever reason, that Taylor also belongs to her,” Prescott says. “She explains her reasons … and they’re kind of sensical.” Adds Jacoby-Heron, “There are going to be a lot of ethical decisions for the viewers to make.”

CRASH’S REDEMPTION | Carter’s no-good, friend-shooting ex-boyfriend returns in Season 2, but you’ll be happy to know he’s not quite the same guy you remember. “He genuinely wants to be a good person, but he didn’t have the tools to do it before,” Prescott explains. “His uncle comes into the picture and shows him … what a good person he can be. That’s sort of his catalyst for change.”

DAVID’S SECRETS | Also turning over a new leaf in Season 2 is David; the formerly secretive head of the Stevens family is finally ready to open up about his past. “He’s still shady, but we get to see more of an emotional side now,” says Jacoby-Heron. Adds Prescott, “You see that he’s upset about what he’s done. It makes him more of a human. You definitely empathize with him more now.”

NEW GIRL | In addition to all the familiar characters stirring up trouble in Season 2, a few newcomers will also keep things interesting. “There’s a new friend who shows up from Carter’s old life, so Carter and Max both know her,” Prescott reveals. “Carter’s kind of pissed because the girl hasn’t gotten in contact with her [since she reunited with her birth parents.]”

Your thoughts on these new teases, Finding Carter fans? Your hopes for Season 2? Drop ’em all in the comments section below.