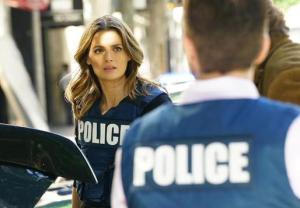 This week on ABC’s Castle, Rick and Kate prepared to go dancing with the NYPD stars, while investigating the murder of an ambulance chaser. Also: more hints at Beckett’s eventual career move?

Let’s face it: the real draw/curiosity-piquer here was the PBA talent show, where Ryan and Esposito — most recently fueled by a “Crime of Our Lives” Dirty Dancing homage — reign as two-time champs. This year, however, since Rick is eligible to participate, subbing as he is for Jimmy Kimmel as the celeb guest, all bets are off. Or on, actually, since he makes a wager with the boys.

Rick of course fails to run this by Kate, who has concerns about doing anything too silly, since one day she may be captain and needs to command respect. Rick suggests that the two of them will simply do their “routine” — as in, the song they sing together naked in the shower (“where no one can see or hear us,” Kate points out). Later, we see them rehearsing ballroom dance-y moves, and things are looking good, but Kate ‘fesses to Martha in private that she gets awful stage fright. Rick, it turns out, overheard this admission, and pulls some strings to get his buddy Kimmel back as celeb host, thus disqualifying him and Beckett.

So no, we never got to see Caskett’s official, clothed performance, though the episode’s coda teased viewers with the silhouette of them doing their “routine” in the shower, unfettered. Plus, just as entertainingly, there was a full-on performance of Ryan and Espo’s “Get Lucky” number, as they “privately” rehearsed in the interrogation room. A sample from Castle‘s Twitter feed is below:

As for the Case of the Week itself: the less said, the better. A shlocky, as-seen-on-TV lawyer nicknamed “The Pitbull” got offed by an even cornier rival, all over a crash test dummy that incriminated a fictional auto maker in covering up a defect. Why they decided to bury the dummy, wrapped like a body, deep in the woods versus, say, simply stow in a storage locker somewhere, made little sense. But hey, Andie McPhee/Mrs. Hotchner sighting!

What did you think of “Habeus Corpse”?