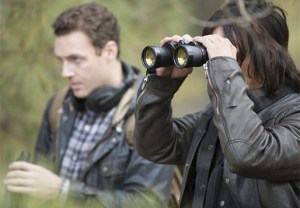 For crying out loud, they had wine, Rick! And beer! Yet, in last week’s episode of The Walking Dead, Jessie’s protector nonetheless made himself a prime candidate for banishment from Alexandria by waving a gun at his new friends and neighbors in a failed attempt to stage a coup. So did Deanna cast out her volatile constable in this week’s finale? Did Glenn, as rumor had it he would, meet his maker? And did Judas stand-in Gabriel get what he so richly deserved? Read on, and I’ll tell you!

WE MEET AGAIN | As “Conquer” opened, Morgan encountered a guy with a “W” scrawled on his forehead who explained that the letter stood for “wolf” and that, eons ago, the first settlers in the region had put bounties on the animals’ heads. He wasn’t all about the chitchat and historical trivia, though. He and a fellow wolf aimed to rob and kill Morgan but instead got their asses handed to them.

TOWN SQUALL | Back in Alexandria, Rick awoke after last week’s brawl torn between his desire to take over the place and his desire to stop lying. Carol’s priceless response? “Oh, sunshine, you don’t get both.” Nearby, Maggie – bewilderingly still telling no one about Gabriel’s betrayal – warned Deanna that there was no way she could kick Rick out after inviting in his whole group. Reg – a kindly voice of reason – pointed out that a member of Rick’s own group, Michonne, had stopped him. But Deanna still maintained that she was going to do what she had to do. Talking to Carl later, Rick promised to do whatever he had to do, too – even if that meant killing an Alexandrian.

Nearby, Carol paid Pete a visit and used a knife to suggest that, since he treated Tara, it would be in his best interest to check on his patient. Speaking of Tara, when Abraham visited her, he wound up not only accepting Eugene’s apology for his big D.C. lie but also apologizing himself for almost killing the smarty pants. (By the way, eventually, Tara woke up.) Before the town meeting on Rick’s fate, he confessed to Michonne that he, Daryl and Carol had stolen guns and kept it from her. She assured him that, no matter what, she was with him. As if to prove it, she refused to take the new gun that Carol had slipped him. “Something’s gonna happen” at the town meeting, she concluded. “Just don’t make something happen.”

OH, SHOT! | After a sweet scene with Maggie, Glenn tailed Nicholas as he snuck into the woods with his secret gun. Natch, the first chance the villain got, he shot Glenn. (C’mon, you knew he was in trouble the minute he told Maggie “I love you,” right?) During the foes’ ensuing fistfight – you didn’t think one stinkin’ bullet would take out Glenn, did you? – a walker approached, and rather than get bitten, Nicholas released Glenn… only to have the zombie and its friends descend on him! Miraculously, Glenn once again cheated death (whew!) and got the drop on Nicholas. But when push came to shove, our hero couldn’t pull the trigger and kill his attacker. Instead, he helped Nicholas up. (Please don’t let this come back and, er, bite Glenn.)

Also in the woods, Gabriel – unarmed, because “the word of God is the only protection I need” – interrupted a walker’s lunch to offer himself up as dessert. Sadly, he didn’t get devoured, he pulled off the walker’s head with a noose, bashed its skull in and curled up in a ball to weep. Upon returning to the safe zone, he was tasked by Spencer with closing the gate behind him… and left it wide open, the bastard! Returning to his chapel and finding poor, depressed Sasha there seeking counsel, he blamed Bob’s death on her sins. From there, things escalated to the point where Sasha’s gun was pointed at him. “Do it,” he said (right after I did). But, before she could, Maggie came in and defused the situation, kinda hearing Gabriel’s confession (to his culpability in the deaths of his congregation) and joining him and Sasha in a prayer circle.

GOING OUR WAY? | On the road tracking a poncho-clad stranger, Daryl asked Aaron about the people that had been sent away from Alexandria early on – two men and a woman. Aaron had been sure that they were going to work out. “I can’t make that kinda mistake again,” he said, clueless about the goings-on back in Alexandria. The duo lost the man they were following but consoled themselves with the discovery of a food processing plant. (Spaghetti doesn’t grow on trees, after all.) Unfortunately, the joint’s 18-wheelers had been booby-trapped, so when Daryl opened the back of one, they all opened – and they were full of walkers (at least one with a telltale “W” on her forehead)!

While trapped in a car by what looked like a zillion walkers, Daryl marveled that “even now, it still feels more like me” than Alexandria did. That being the case, Daryl decided to get out of the vehicle so that Aaron could make a break for it. Good guy that he is, Aaron wouldn’t let him. “Whether we make it or not,” he insisted, “we do it together.” Luckily, Morgan happened along at just that moment and saved them. As Aaron is wont to do, he invited Morgan to consider joining their community. But Morgan passed, saying that he was on his way somewhere – and showed the guys the map to D.C. that Abraham had given Rick back at Gabriel’s church.

ALL’S WELL THAT ENDS… OH DEAR | Though Rick was a no-show at the town meeting – having spotted the gate that Gabriel left open, he was too busy dispatching the walkers that had stumbled in – Deanna started it, anyway. After Michonne, Carol, Abraham and Maggie all spoke up on Rick’s behalf, Deanna revealed Gabriel’s warning. “Hearsay,” cried Jessie (not literally). Before any decision could be made, Rick arrived with a felled walker over his shoulder. (Helluva an entrance, dude.) The walkers and the people on the outside, he said, “they’ll hunt us, they’ll find us, they’ll try to use us, they’ll try to kill us, but we’ll survive. I’ll show you how.” Just as things were looking up, in came Pete with Michonne’s sword in his hand and murder on his mind. Reg tried to intervene but only wound up getting his throat slit. And with that, Rick’s place in Alexandria was secured. “Rick,” said Deanna, “do it.” So, without hesitation, he shot Pete… just as Morgan showed up at the gate with Daryl and Aaron! After the closing credits, Michonne hung her sword back up, then thought better of it and decided to begin wearing it again. Oh, and as for Daryl and Aaron’s poncho guy? Having been killed by Morgan’s attackers (who also set the booby trap at the food processing plant), he wandered past a vehicle with “wolves not far” spray-painted on it.

What did you think of the episode? The season? Hit the comments!