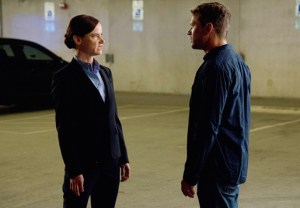 “I know who you are, and I know you killed Tom,” Ben Crawford’s stalker tells him in Sunday’s episode of Secrets and Lies. “And that’s how I know you’re going to confess before I’m through.”

That chilling prediction, paired with this week’s curious episode title — “The Confession” — leads us to the obvious question: Might we learn, by the end of the hour, that Ben is the guilty one, after all?

Well, the short answer is: Of course not. By the end of the hour, we’re no closer to learning who killed Tom than we were in the pilot — though we do learn the identity of who’s been making Ben’s life miserable for the last week (other than Detective Cornell, I mean).

But before you give me your thoughts on Sunday’s episode, let me back up and explain how it all went down.

Fresh off getting locked in his own car, Ben insists that he doesn’t want a security detail to keep him safe (though he does agree to getting one for his wife and kids). Instead, he chooses to crash at Dave’s place for a while, knowing that if the stalker wants to put Ben in danger, at least Christy and the girls will be out of the way.

Now, Ben has had a lot of incorrect hunches about his neighbors these last few weeks — but the one he has in Sunday’s hour proves to be right on the nose: Kevin, who we learn has previously served in a war and worked for the State Department, is indeed the man behind Ben’s death threats. While Ben is outside Dave’s house, chasing down a distraught Jess, Kevin holds a gun to Ben’s head and gets him in the trunk of his car.

The two go to an abandoned warehouse, where Kevin uses his old military tactics — including some horrible, horrible screamo music — to torture Ben. While he waterboards Ben, Kevin reveals that he not only saw Ben cheating on Christy with Jess six years ago — but the infidelity reminds him of when his wife cheated on him while he was serving in the war. (I know we all have our demons, dude, but I feel like this is not the right way to cope.)

Later, Kevin takes Ben out into the woods, where he forces him to dig with his hands until Ben confesses to killing Tom. (Which means Ben will be digging for a while.) Even after Ben knocks Kevin out and makes a futile call to 911, Kevin still catches up to Ben and threatens once more to shoot him on the spot. Fortunately — a word I haven’t ever used to describe Cornell’s sudden appearance — the detective arrives just in time to save Ben and put Kevin in police custody.

Even after he gets back home to his family, though, Ben is clearly out of sorts. He confesses to Dave that he’s ashamed of how he’s reacted to Tom’s murder, making himself the victim instead of helping those who are really hurting. But Ben hardly has time to dwell on his mistakes: Later that night, the shady journalist Arthur Fenton sends Ben an e-mail, with an article whose headline reads: “The family: What are they hiding?,” complete with a photo of Christy, Natalie and Abby.

Ben’s natural reaction is to visit Arthur’s home and punch him in the face, which he does more than once… until he discovers an entire wall of Arthur’s home that is covered with news clippings of Detective Cornell. “I’m after Cornell,” Arthur admits. “And I need your help.”

OK, your turn. What did you think of this week’s episode? Were you surprised that Ben’s infidelity was, in large part, due to his anger over Christy’s abortion? And might Dave be so innocent, he’s actually suspicious? Hit the comments! 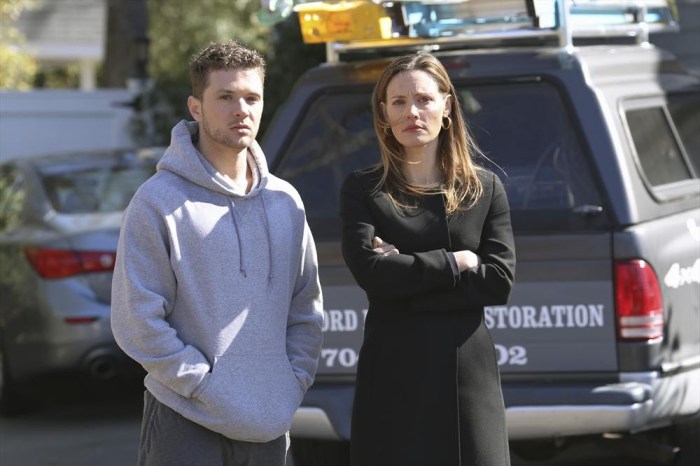