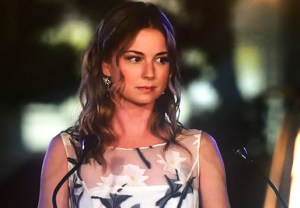 Sunday’s Revenge served up the most highly anticipated press conference since Tiger Woods apologized for naked-hugging all those ladies, as Emily Thorne approached the podium to finally set the record straight.

“I am David Clarke’s daughter,” she revealed after telling what really happened the night of Daniel’s death, subbing Kate out for Malcolm. “I am Amanda Clarke.” Drop the mic. Call your mom. The secret is finally out.

Naturally, the dramatic scene was broadcast live on the news — the cameraman should get a raise for catching Jack’s reaction shots — for everyone to see, including a surprised Nolan (“What the hell, Ems?!”) and an already-insecure Ben, who by now should be very aware that his ex-partner is destined to be Emily’s future partner.

We won’t get to see the fallout from Emily’s confession for a few more weeks — thanks a lot, Easter! — but I think it’s safe to say that nothing will ever be the same again. Also, Nolan’s going to be so pissed she didn’t tell him in advance; you just know he’s had a “reveal night” outfit picked out since Season 1. 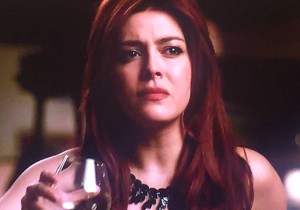 SECRETS AND LIES | Everybody deals with loss differently, and I understand that things can get especially weird when the deceased is your brother whom you accidentally pushed to his death — but a baby? That’s pretty much the last word I expected to come out of Louise’s mouth this week; “honest marriage” was second-t0-last. Of course, she started having second thoughts after reading that gossip blog about Nolan’s boozy beach party with Tony, then eavesdropping on Nolan’s heart-to-heart with Jack. Frankly, after hearing Louise’s definition of a fun day — watching trashy TV and getting day drunk — I’m surprised Nolan wouldn’t be thrilled to settle down.

Louise and Nolan eventually talked it out, but don’t for a second think that she walked — er, swam — away from their conversation with anything but contempt. That peeking-out-from-the-water look she gave at the end of the episode was straight out of Wild Things, and as we all know, hell hath no fury like a crazy southern lady scorned. (Watch your bank account, Nolan!)

LET’S CALL THE WHOLE THING OFF | After learning that Lyman died while working for her, Margaux decided to formally retract her claws, as well as the hit she had planned on Emily. Unfortunately, that was easier said than done; she had to arrange a meeting with the middleman — or middle woman, as it were — who turned out to be none other than Courtney freaking Love. (According to IMDB, Love’s character is named White Gold, which couldn’t be any more fitting/insane.) She agreed not to go ahead with the plan, but Margaux knowing her true identity still poses a serious problem… 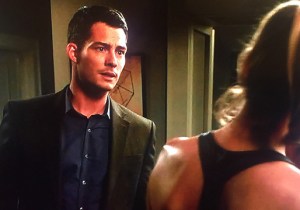 IT’S BEN FUN | I don’t know what surprised me more, that Ben was promoted to detective, or that he had the balls to casually stroll out of Emily’s house in the morning and kiss her right in front of her dad. (I loved David’s greeting, by the way. “Job interview?” That’s shady, Mr. Clarke.) His first day got off to a rocky start, with Victoria ambushing him in the men’s locker room with not-so-veiled threats on his job, should he decide to assist Emily any further. Needless to say, that little chat is already making big waves — and I doubt the good ‘ship Bemily has what it takes to weather the storm. (Oh, and a special nod to Victoria for that A+ exit. “Bye, boys!”)

Revenge fans, are you as surprised as I am that Emily’s secret is finally out? And how do you suspect Louise will get her revenge on Nolan? Drop a comment with all of your thoughts and theories below.