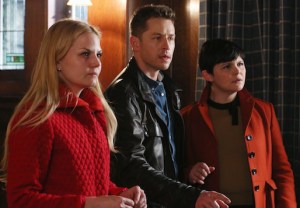 ABC’s Once Upon a Time did a very smart thing leading into the two-week Easter break: It answered several burning questions/loose threads, and in doing so set things up nicely for the final salvo of Season 4.

For starters, in flashback, we learned that Snow and Charming– spooked by one premonition produced by the touch of a unicorn’s horn — were coaxed by a peddler (Mad Men‘s Patrick Fischler) into visiting the Sorcerer‘s Apprentice, who offered them a way to “guarantee” the goodness of their unborn child by transferring its potential for darkness into another “living vessel.” They get the (already morally iffy) idea to use the egg that dragon Maleficent just laid, assuming that it contains a wee fire-breather. But two tragic surprises await them when they bring the vessel to the Sorcerer‘s Apprentice: One, he is transporting the vessel to another realm — so scratch that noble idea of “returning” the tarnished egg to its Mommy! And two, there’s actually a human baby inside, they all discover, just before the egg (and a flailing Cruella and Ursula) tumble into a portal to our realm.

So right there, you get the answer to how the Charmings “lost” Mal her child, as well as how the other Queens of Darkness landed in our realm.

Afterward, Snow is (rightfully!) feeling all kinds of icky/lousy — she even rues the baby shower gift that box office queen Cinderella sent them — and all David can suggest is that from here on, they live to be the best people they can be, spreading hope and faith at every turn. So that explains why the Charmings are so… goody-goody.

Meanwhile in Storybrooke… Henry did something smart. Bless him.

Pressured by Rumple & Co. to procure the illustration of the door, Regina tries to get by with just a cell phone snap of it (and a Blackberry one at that!), but when Rumple sees the magic surrounding the door, he insists on getting his hands in the real deal. That leads to a confrontation with storybook-toting “Henry Daniel Mills,” who (thankfully) catches his Mom’s drift and turns over the forged illustration that Emma conjured up earlier.

However, Rumple — who paid sleep-spelled Belle a brief visit, to promise to return for her after he “changes the rules” (or something) — is not so easily fooled by the fake, so he has Mal KO Regina. And he is confident that when Regina awakens, he has something that when she sees it, will have the Evil Queen doing his bidding forever.

Meanwhile, when it comes time to dupe Henry some, the Charmings realize they can lie no longer. So they come clean to Emma about their secret and her potential darkness, and Emma reacts strongly-ish. After she sulks a bit, Hook lures Emma back to see August, who has awakened from a storyline-dictated nap. (He puts the lumber in slumber, one could say!) Emma shows August the illustration and the key Henry was led to inside the Sorcerer’s mansion. August informs/warns that the Author is not a person but a job — kinda like the keeper on the island on Lost — and it has been held by many, many witnesses and recorders of the greatest stories of our time (a man named “Walt” included). And the last man to hold the gig got locked inside the book because the Sorcerer realized he was manipulating people/stories in a slightly wicked way.

Nonetheless, Emma sees this Author’s potential to change things up, so they use the key to release him from the illustration… and it’s the peddler, who then quickly gives a roomful of heroes the slip, escaping from his Savior/saviors.

Elsewhere, Mal leverages Rumple to uphold his end of their deal (even though she failed to deliver the illustration). He warns that in doing so, he might feed her existing pain with a ginormous meal. She persists, though, so he reveals the fate of her child — and we see in flashback a man from our realm holding a newly adopted baby daughter, whom he names… Lily.

What did you think of this week’s episode and its many reveals?