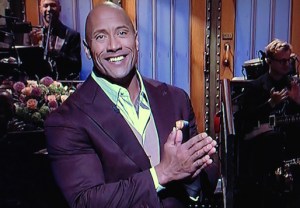 It’s almost too easy to declare that Dwayne “The Rock” Johnson “rocked” as host of this week’s Saturday Night Live — but that doesn’t mean such a statement would be inaccurate.

In fact, it says a lot about the Furious 7 star’s comedic chops that the evening’s worst sketches either gave him absolutely nothing to do (“Cooking With Paul”) or didn’t include him at all (“The Circus”).

Johnson proved so fearlessly committed to his punch lines that he even scored a few laughs during a throwaway musical monologue about his status as “box-office Viagra” and a cold open that found him bringing to life a new (and amusingly enraged) side of Jay Pharoah’s accurate but ultimately tepid Barack Obama impression.

Below are my picks for the week’s best and worst:

BEST: WRESTLEMANIA PROMO
I’ll admit I had my doubts at the start of this bit, in which rival wrestlers Johnson and Bobby Moynihan filmed a promo video punctuated by the former’s below-the-belt barbs (“He’s got herpes — and he’s got it bad!”). Things got rapidly (and hilariously) darker soon after, though, with Johnson’s Coco Watchout revealing he’d tracked down his rival’s secret daughter (an honors student named Evelyn who’d deemed biological father Moynihan as “not fit to be a dad”) and also managed to Catfish him on the internet in yet another step toward psychological destruction.

BEST: BAMBI TRAILER
Continuing Disney’s live-action remakes like Cinderella and Maleficent, The Rock popped up in forest-y drag as a young deer seeking revenge against hunters for their role in his mother’s death. “Now it’s time for them to pay — deer-ly” might sound groan-inducing on paper, but thanks to Johnson’s timing and commitment, it scored nothing but guffaws. (Taran Killam as Vin Diesel as Thumper, by the way, was absolute perfection. I’d like to see the show provide Killam with more chances to channel the bald-n-buff film star going forward.)

BEST: ANNIVERSARY DATE GONE WRONG
Johnson and Cecily Strong were hilarious as a douchey muscle dude and his dim-bulb British girlfriend crashing the anniversary date of a random guy he’d met on jury duty (or, as Johnson’s meathead put it, “we sent that guy to the chair together!”). Vanessa Bayer and Kenan Thompson helped sell the scene with their shock and discomfort, but it was Strong’s penchant for obsessing over British-isms (“Nibbles!” “Footballers!”) and Johnson’s repeatedly expressed obsession over his own (and Thompson’s) states of arousal that made this one a classic.

WORST: COOKING WITH PAIL
Thompson played a three-time convicted sex offender repeatedly attempting to sneak onto the Internet to find his next victim — with Johsnon’s parole officer continuously thwarting him. Was there supposed to be some kind of intriguing twist to help transport this sketch past the point of mere ickiness, one that got cut just for time? I’d like to think so. Whatever the case, though, it once again drove home the point that you should never attempt to be “edgy” if you’re not being funny first.

WORST: THE CIRCUS
Even Kyle Mooney’s best video shorts can be a little hard to process, but this one in which he went backstage at Ringling Bros. circus and interviewed reluctant young kids about their experiences wasn’t just laugh-free, it was also hella boring — and borderline creepy.

What did you think of Dwayne Johnson’s SNL hosting gig? Take out poll below, then sound off in the comments!