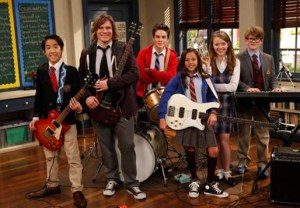 Nickelodeon is ready for some headbanging.

The kids’ network has locked down the cast of its upcoming School of Rock series, based on the 2003 film starring Jack Black as a down-and-out musician who poses as a substitute teacher.

The 13-episode series, currently in production in Los Angeles, is scheduled to debut this fall.

* NBC has ordered eight episodes of First Dates, a docuseries exec-produced by Ellen DeGeneres and Shed Media. The hour-long program — which is based on the U.K. original — follows a series of real couples’ maiden voyages that take place during one night at the same restaurant.

* Directly following the season finale of Shameless, Showtime will air a sneak preview of the Happyish pilot on Sunday, April 5 at 10/9c. The comedy series — which stars Steve Coogan (Philomena) as a middle-aged ad executive in the pursuit of (spoiler alert!) happiness — will officially debut on Sunday, April 26 at 9:30 pm.

* Season 2 of Syfy’s Dominion has added recurring players Nic Bishop (Covert Affairs), Simon Merrells (Spartacus: War of the Damned), Christina Chong (24: Live Another Day), Olivia Mace and Luke Tyler as, respectively, a military genius, the leader of the New Delphi, a member of Vega’s Archangel Corps, the leader of a small town of survivors and a bright teenager.

* Cameron and Tyler Winklevoss — best known for suing Mark Zuckerburg over the founding of Facebook (and helping Armie Hammer become a household name) — will appear as themselves in the Season 2 premiere of Silicon Valley, airing Sunday, April 12, per The Hollywood Reporter.

* HBO has released a trailer for The Casual Vacancy, its upcoming miniseries based on J.K. Rowling’s novel. Check out the teaser (which contains NSFW language) below: