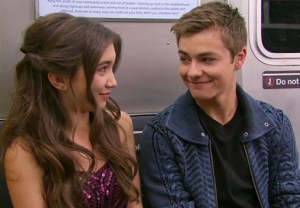 Girl Meets World wrapped its first season Friday exactly where it began, with wide-eyed world-meeter Riley Matthews being thrust into the confused arms of Lucas, her knight in shining v-necks — only this time, things ended a little differently.

Riley and Lucas had just reached the end of their first official date, which Papa Cory — exhibiting a parental fear the likes of which I’ve never seen — managed to turn into a double date, enlisting an excited Farkle and a reluctant Maya to tag along as chaperones.

And it’s probably a good thing Cory wasn’t on the subway to witness what happened next: his daughter’s first kiss! “You know those moments we were talking about that we’re going to remember forever?” she asked before going in for the kill.

Heck, even Farkle managed to get a little sugar before the end of the night, even if it was merely with Maya’s open palm. (“Tell your friends!”) 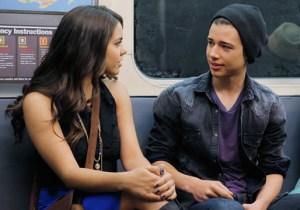 But as one Matthews discovered the joy that dating has to offer, another was reminded of just how quickly that joy can turn to crushing despair; after spending the bulk of the episode thinking he was hitting it off with his NYU tour guide, Josh was dealt a cruel blow when she reminded him, “It’s my job to be nice to high school kids.” (Ouch!)

And I’m not sure what to make of Auggie, who exchanged vows — and Topanga’s ring — with his pal Ava, promising never to make her feel bad for the rest of his life. Is it possible that the youngest member of the Matthews clan has already figured out this whole “world” thing before reaching fourth grade?

It’s like Cory and Riley said, “Life as we know it has changed.”