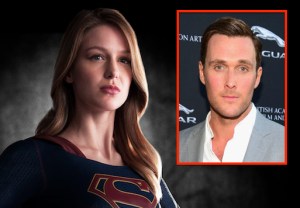 The Mentalist‘s Owain Yeoman will be the first to battle CBS’ Supergirl, as the DC Comics character Vartox.

The website i09 was first to report on the casting.

Per DC Comics lore, Vartox hailed from the planet Valeron and boasted powers on par with those of Superman, with whom he was friendly. In his most recent comic book iteration, Vartox attempted to woo Power Girl, in the name of (bow-chicka-wow-wow) repopulating his infertile planet with the most supreme female specimen he could find.

That said, TVLine hears that in CBS’ Supergirl pilot, Vartox is an alien convict who has been hiding on Earth for 12 years. After Supergirl’s emergence as a public hero, he seeks her out to ascertain her identity and do battle with her.