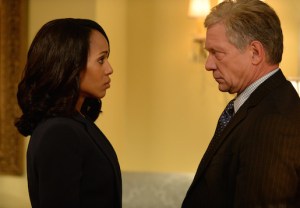 This week on ABC’s Scandal, Cyrus suddenly found himself quickly heading for a wedding, Sally Langston returned as a “bully” and Olivia gave Fitz a ring.

So, the return to frantic, “old school” OPA fixing took a back seat this week, in a quieter hour that was squarely focused on Cyrus’ long-gestating fauxgagement to rent boy Michael. The chief of staff’s fiance got caught carousing at Gentleman John’s, so spin was needed, to spare Cy disgrace.

Olivia’s fix: fast-track a “gay, Republican wedding,” held at no less than the White House — and hosted by Mellie, in what Olivia insists would be a savvy move for the aspiring politico.  Meanwhile, Huck and Quinn get Michael’s night of debauchery re-characterized as an “innocent bachelor party.”

Amid this crisis, we get flashbacks to several periods of Cyrus’ past, starting with his proposal to wife Janet (Shameless‘ Emily Bergl), back when he was merely running for comptroller. We then glimpse his wedding day, where moments before exchanging vows he’s fending off a groomsman’s aggressive invite to “play racquetball.” Then, some 16 years into marriage, we see Janet declare enough is enough and ask for a divorce — as she dares her wannabe congressman husband to “admit” he’s not gay, and she’ll “admit” she’s not having an affair.

Next, it’s Cyrus’ wedding day to James, who has jitters about the optics on an up-and-coming journo marrying the White House chief of staff. Cy assures James he’ll never have to compromise his principles… though as soon as honeymoon-time, we see Cyrus plant a story with James to ward off an attack on Fitz’s immigration reform plan.

But wait, Cy’s not the only one having flashbacks. We also see that on the day of his marriage to James, Olivia and Fitz had a heart-to-heart after she tendered her resignation, because, she explained, “I can’t see you every day,” feeling what she feels. Fitz gives Liv his grandmother’s ring, which is called a doux bébé — or “sweet baby” — and it’s the ring, you’ll recall, Liv left behind during her abduction and afterward shoved in a random vase.

Meanwhile in the present day, Sally — now the host of a Sunday morning news program — is a dog with a bone when it comes to exposing Cyrus’ fraudulent relationship, and to that end has booked a man Michael has been carrying on with. Liv sees Fitz (sans “sweet baby”) to get his sign-off on a deal to make Sally Secretary of State if she bails on her interview; but the former veep greatly prefers her new “bully pulpit,” where her voice can finally be heard. At a loss, Liv tells Cy the only play left is to throw Michael under the bus and cast Cyrus as a forlorn “broken heart.” Cy is fine with that despicable fix, until he sees how horrible Michael’s visiting, bribed-by-LizzieBear parents are to their son during dinner.

The next morning, Cyrus signals to Liv that there has been a change of plans, so she approaches Sally with proof (or “proof”?) that the late Daniel Douglas also was a (frequent) client of Michael’s. And yes, she’d smear the name of a dead man, since Sally is so rarin’ to ruin an alive one. Sally decides to cancel the booking, while Cyrus and Michael — following a conversation where Cyrus promises to do his best to be “someone” for Michael, who feels so alone in life — wed at the White House. There, Liv is again wearing the “sweet baby” ring, which Fitz notices.

What did you think of this week’s Cyrus-centric, Jake- and Rosen-free Scandal?