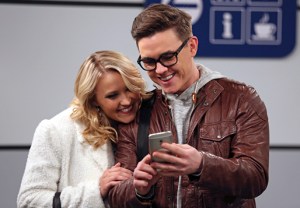 ABC Family’s Young & Hungry returns for its second season Wednesday (8/7c), as does nerd-in-shining-armor Cooper (played by Jesse McCartney) — but how long before Gabi’s jealous boss chases him back to China?

“There’s definitely a lot more tension between Josh and Cooper this season,” McCartney tells TVLine. “Before, when Josh was engaged, he couldn’t really let on how he felt about Gabi. But now that Josh is single, it becomes a full-on love triangle.”

And in true love-triangle fashion, it isn’t long before Gabi catches wind of Josh’s feelings. 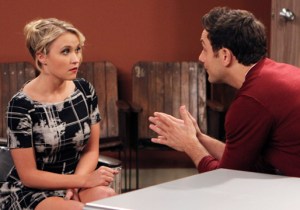 “Gabi is eventually going to find out how Josh feels about her, and it’s going to make things pretty awkward for the three of them,” McCartney teases. “And I don’t think I’m giving too much away by saying that she’ll eventually have to make a choice between the two.”

Regardless of which guy Gabi chooses, though, McCartney says he’s just enjoying dipping his toe back into the comedy world.

“I actually think the last time I did a sitcom was Hannah Montana back in the day,” he says. “And that was with Emily Osment, so it’s like we’ve come full circle!”

Time to weigh in: Are you #TeamCooper or #TeamJosh, and what else are you hoping to see in Young & Hungry‘s sophomore season? Drop a comment with your thoughts below.