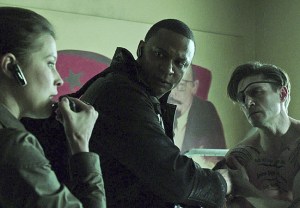 This week on The CW’s Arrow, newlyweds John and Lyla apparently registered at Bloodbath & Beyond, while Oliver and Ray each discovered how the other likes to dress up at night.

As Diggle-centric episodes go, “Suicidal Tendencies” probably was my favorite to date, largely because in addition to giving much-needed focus to Team Arrow’s lone uncostumed hero, it served up solid B-stories on the periphery.

The wedding itself was short but sweet in the way it had fun showing how utterly awkward our heroes are when summoned to partake in normal human social activities. (I mean, just the fact that Laurel had to coordinate an arm cast with that dynamite dress….) That said, I’m not entirely sure what shoe-horning Ray into the role as emergency minister accomplished, but we’ll have to allow it.

As for Diggle’s op itself: One of the “problems” Arrow has butted up against in recent months is Oliver’s steadfast stance that a city-saver cannot have it all, that there is no room for family/romance — and yet Diggle has seamlessly segued into his role as father (albeit “working the comms” a bit more frequently). Deadshot echoes Ollie’s opinion, because as we see in better-than-Hong Kong flashbacks, Floyd had a really rough go of it upon returning from the war — embraced by his wife, yet met with indifference by his very young daughter. What’s more, he couldn’t hold a job or socialize, all because of the PTSD caused by his role as soldier — how every time he pulled a trigger, someone died. Quite literally, being a sniper and all

One 911 call and restraining order later, Floyd ends up in jail — but gets bailed out by a slithery H.I.V.E. representative, toting a briefcase full of cash and his first kill assignment: Andy Diggle.

That particular kill reverberated briefly during the Suicide Squad’s mission to save a kidnapped senator (as if Steven Culp would ever be cast as merely a “kidnapped senator”), when in between deadly melees John catches sight of his brother’s name tattooed on Floyd’s chest, amid a veritable Who’s Who of those Deadshot has shot dead. Even so, Diggle soldiers on and ultimately laments the loss of his frenemy, who — in keeping with the squad’s name — sacrifices his life for a greater good. So that John and Lyla can return home and be a family.

OK, Cupid. No, not the dating site I frequent, but a new topic. There are two schools of thought on her inclusion here. Either you welcome her loopy quips (“We’ll make strong, beautiful babies”) and horndog stalker attitude, or you find them intrusive amid the action. I for one at first found her jarring in this episode, in a square peg/round hole way, but as the hour progressed, I gradually “warmed up” to her wanton ways, especially when it afforded Deadshot cause to roll his eye at her.

Will Diggle follow through on his decision to quite Team Arrow? Or will Lyla resigning from A.R.G.U.S. be enough to normalize their family unit? We shall see…. 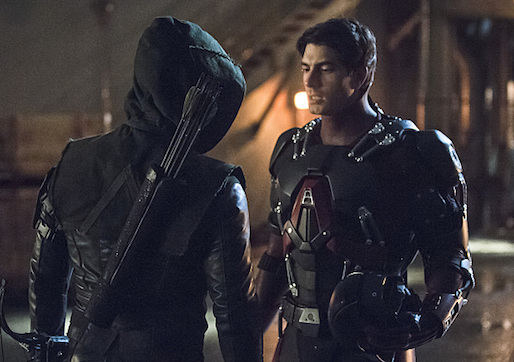 Ra’s al Ghul’s campaign to paint the Arrow a relapsed assassin worked in spades, landing the vigilante on the radar of the mayor, Captain Lance and resident rich kid Ray. Then, Ray-as-Atom grabs a scan of the real Arrow and realizes his true identity. This causes friction with Ray’s lady, makes for a tense moment when Oliver visits his old offices to plead his innocence to the tech titan now privy to his secret, and then sets the stage for an Atom vs. Arrow/Arsenal clash that made Ray come off as juuuuuust this side of off-kilter, consumed as he was with the idea that — despite level-headed Felicity’s protestations — Oliver Queen is a cold-blooded serial killer. (And yet Ray has no qualm with zapping Roy across a parking lot? Oliver put it best earlier: “Unstable.”)

The saving grace of this skirmish, of course, was that Oliver had no trouble exploiting the weakness in Ray’s suit design, and then emerged as the better man by not offering his opponent an arrow through the head but a helping hand… and the advice to trust Felicity, who did choose Ray after all.

Having just beat up on Ray some myself, I will say this: The scene that followed, where Felicity asked if his “offer” of a partnership — in his mission and in life — was still on the table, coupled with Ray’s refreshingly warm response, in my mind was that couple’s first good moment.

Alas, as the episode drew to a close, Felicity was in the crosshairs, not so figuratively, as Maseo launched an assault of arrows on the mayor’s meet-up with Ray, the Lances and others.

What did you think of the episode “Suicidal Tendencies”?