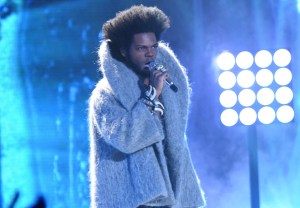 Picture it: Germany, 1989. (Yes, the first four words of this American Idol recap are inspired by The Golden Girls‘ incomparable Sophia Petrillo.)

Knight Rider star David Hasselhoff is performing a partial striptease in the one country that’s embraced his pop-star aspirations as warmly as they’ve accepted sauerkraut and spätzle on their dinner tables. He’s shaking what his mama gave him and belting some of the decade’s biggest hits: “Walking on Sunshine.” “Crazy Little Thing Called Love.” “Let’s Dance.”

Except, hold up, it’s actually 2015 and we’re on a Los Angeles soundstage for Idol‘s Top 11 (Redux) Performance Night. Here, apparently, the show’s producers have decided to administer a stern test of the Idoloonie Nation’s loyalty: Will they endure a full 15 minutes of being force-fed off-brand, processed cheese — did I mention a turgid group performance of “Karma Chameleon” by the Top 11 follows the gasping medley by The Hoff? — or finally give up and say “Y’know what? I’m gonna Netflix some Unbreakable Kimmy Schmidt right about now.” 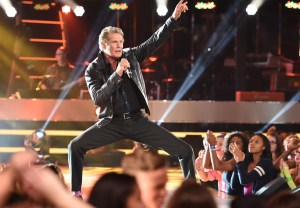 That’s a damn shame, actually, seeing how there are at least a half-dozen kids with major hit-making potential left in the Season 14 race (even if, alas, not all of ’em definitively proved it this week). I mean, doesn’t executive producer Per Blankens realize that the only reason viewers still flock to this show is to catch a glimpse of a star being born? An extra 10 minutes of contestant performances — or even footage of rehearsal sessions with very astute mentor Boy George — would’ve been far more entertaining.

Would How to Get Away With Murder deprive us of Viola Davis for a full quarter of an episode? (No!) Would The Big Bang Theory skimp on the Sheldon? (Hell, no!) Would Empire let Boo-Boo Kitty kill off Cookie Lyon? (Just let Fake-Ass Lena Horne try it!)

OK, OK… I might be on a tangent. But before I jump into a discussion of this week’s performances, let’s cut to the double elimination based on last week’s votes (and revealed at the end of the episode):

Oh, Maddie, how I wish you’d waited three more years to audition! And oh, Adanna, how I wish you hadn’t got stuck with the kicking-off-the-episode death slot last week: Despite your untimely exit, you earn the Haley Reinhart Plucky Underdog Trophy of Season 14. May you place it on your mantle with pride.

And now, as you process the fact that more people wanted to hear Daniel Seavey grab the mic than Adanna Duru (who was supposed to cover “I Hate Myself for Loving You,” dammit!), let me get on with my letter grades and reviews for this week’s performances: 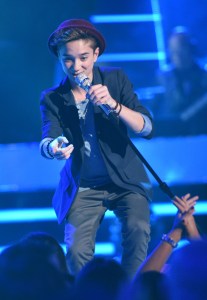 Daniel Seavey – “You Make My Dreams” — Grade: D+ | It’s hard not to be a little angry about Daniel outlasting vastly superior vocalists like Sarina-Joi, Adanna and Savion, but let’s be honest: We really can’t direct our bad vibes at a 15-year-old high-school talent show entrant who, unfortunately, has wandered onto a stage in front of 12 million viewers, right? In the tiny auditorium of a public high school, we’d easily forgive his ever-present “whoa! I’m here!” grin, his disappearing upper register, his hinky choreography (what was that legs akimbo move?) and even his forgotten lyrics heading into the second verse (that went totally unnoticed by the judges). So today, I’ll direct my rage at Keith’s “I’m glad you’re still here” commentary, at J.Lo’s “You did really, really well,” and Harry’s “the vocal was pretty good.” To quote Kathy Bates in American Horror Story: Coven, “LIIIIIIIIIIIES!”

Quentin Alexander – “In the Air Tonight” — Grade: A- | Harry had a point when he told Quentin that an Idol contestant cannot survive on moody, down-tempo jams alone. Nevertheless, I love that Quentin seems to completely sink into whatever lyric he’s delivering — both vocally and from a staging standpoint (the dramatic blue lighting and “seated on a stump” was a little Adam Lambert/”Mad World,” no?). There’s menace and mourning in Phil Collins’ enigmatic lyric, and Quentin brought all those emotions to the surface, especially with the eerie tweaks he made to the melody. OK, maybe two or three of the “tweaks” were just missed notes — it’s hard to tell sometimes! But then I got hypnotized by the fuzzy grey collar of Quentin’s jacket — which contained more fabric than J.Lo’s last three live-show outfits combined! — and I was like, “No, actually, this vocal is totally working for me!” 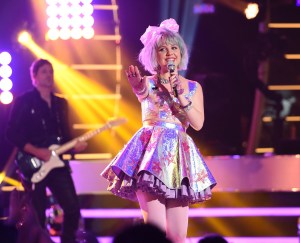 Joey Cook – “Girls Just Want to Have Fun” — Grade: C | Oh dear. Melinda Doolittle and I ended last week’s installment of Reality Check (embedded below) fretting that our saying out loud how Joey had never had a bad song choice would somehow doom her to doing exactly that. And while J.Lo was right that Cyndi Lauper’s breakout hit didn’t really suit Joey’s vocal tone, that was just one of a multitude of problems for the unlikely front-runner. Joey’s intermittent side-to-side jumping — which, I suppose, might fall under the most liberal definition of “dancing” — seemed to throw off her usually solid sense of pitch, and her self-described “Madonna in space” outfit was far too costume-party literal (and a huge step back from last week’s quirky-chic ensemble). Is it worth mentioning the unpleasantly frenetic pace of the arrangement? Or the way Joey seemed to accidentally come in with “they just wanna, they just wanna” in the middle of the “that’s all they really waaa-aaant” refrain? (Yes, it is, mainly because the judges didn’t bother.) I’m just hoping that Joey’s prior performances have given her a big enough fan base to survive a single bad week… because honestly, if she winds up at No. 9, I might be dialing 9-1-1 and reporting a felony robbery. 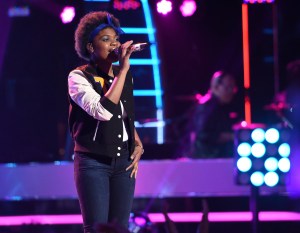 Tyanna Jones – “I Wanna Dance With Somebody (Who Loves Me)” — Grade: B- | Scott Borchetta’s brief mentoring sessions have definitely been more insightful than Randy Jackson’s blah-blah-blahing in Season 13. But why didn’t he try to sway Tyanna away from the night’s least inspired song choice — a jam that’s simply too anchored in time to sound fresh, even with a weird EDM beat thrown underneath it? The opening verse came in a little too low for Tyanna’s range, too — resulting in some unfortunate flat notes — and there were pitch issues when she ad-libbed on the bridge, too. Lucky for Tyanna, though, she landed the vote-activating holleration of the final chorus. So while this probably didn’t add any newcomers to her bandwagon, it ought to be more than enough to keep her out of hot water next week, too. 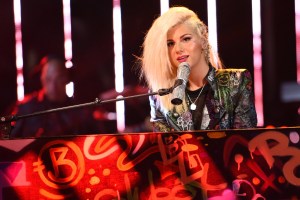 Jax – “You Give Love a Bad Name” — Grade: B+ | Whether you loved or loathed Jax’s reworking of Bon Jovi’s hair-rock anthem, you’ve got to give her an “A” for the audacity of her arrangement, which was almost as weird and wonderful as Blake Lewis’ utterly epic Season 6 reimagining. OK, perhaps the vocal got a weeeee bit garbled toward the end of the dramatic “no one can save me!” breakdown, but for the most part, I thought her lilting instrument was completely in tune, and able to explore new and haunting little crevices of a threadbare melody. And the piano-bench kickdown and one-handed piano-playing that closed the number placed this one firmly near the top of the pack for this week. If she keeps this up, I’m gonna be painting a tiny sparkly X on my right temple by mid-April!

Nick Fradiani – “Man in the Mirror” — Grade: B+ | I could go on a rant about how contestants reeeeealllly need to study their reality singing competition history — and try to avoid jams like “Man in the Mirror” that have been covered umpteen times on Idol and The Voice (and especially in excellent fashion by winners like Kris Allen and Javier Colon). But because I don’t want to be the literal embodiment of the definition of insanity, I’ll critique Nick’s performance on its own merits: Sure, the opening verse started a little tentatively, but once dude got off his stool and physically committed to the music, Nick proved he can crescendo with the best of ’em. Indeed, the raggedy, rapid-fire wordplay of “You gotta get it right, while you got the time/ You can’t close your, your mind!” was the most emotional (and genuinely exciting) that Nick’s been all season. Keep it up, man — the more contenders the better! 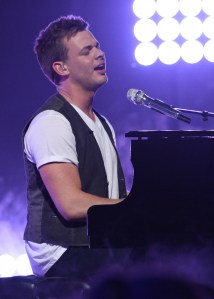 Clark Beckham – “Every Breath You Take” — Grade: A- | Like Alex Preston’s Season 13 low-point, Clark’s “Every Breath You Take” cover didn’t embody the stalker-y spirit of the lyrics or give me nightmares about that creepy-ass CBS procedural I continue to DVR for no good reason. But unlike Alex, Clark found an approach to the ballad that felt deeply and beautifully realized — his sparse, piano-driven arrangement exposing the heart of a dude in a state of utter heartbreak. The way Clark clipped the ends of certain phrases, the little breaths he took in his phrasing, the strain at the top of his register on “baby, baby, baby pleeease” — they were perfect imperfections that helped him tell a real story. I’d still like Clark to give a little more emotion in his face — sometimes he goes so inward that I find myself focusing on questions like “should he have had his barber trim the back of his neck this morning?” — but he still gets my nod as the performance of the night.

Qaasim Middleton – “Addicted to Love” — Grade: C | If Qaasim’s stated goal this week was to dial back on the crazy showmanship and prove his gifts as a vocalist, then why why why why whyyyyyy choose the not-terribly-range-y “Addicted to Love” — and then deliver it with not a stitch of uniqueness or personal flair? Oh, OK, I guess some of the hiccup-y sounds and attempted falsetto weren’t in Robert Palmer’s original, but on the flip side, one should not take liberties with a jam that one is incapable of executing! By the final third of the song, it sounded like last week’s recipient of the Judges’ Save was operating without any kind of road map — and the unpleasant sounds spilling forth from his mouth made me wonder if this was a matter of being under-rehearsed or a fundamental miscalculation of his capability-to-ambition ratio. 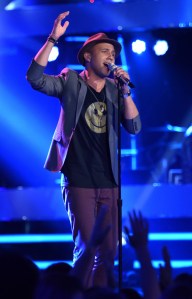 Rayvon Owen – “Everybody Wants to Rule the World” — Grade: B- | First, the bad news: Rayvon’s rehearsal package — in which he was made to look not entirely enthused with Boy George’s mentoring — is not the kind of edit you want to get when you’re part of the season’s first official Bottom 3. And, somewhat surprisingly, the final third of his performance — as he dug deep in a clear attempt to give himself an Idol Moment (TM) and restore his competitive fortunes — found him veering off pitch. The good news, however, is that the opening two-thirds of this cover not only sounded lovely, but found the handsome, hat-wearing fella delivering a lyric like it actually meant something to him (a nice change of pace off the one-two punch of “Burn” and “Stayin’ Alive”). The guy’s tone remains as rich and decadent as hotel room-service, but vulnerability and authenticity are a big part of the game, too. I’d have loved to hear the opening verse done completely a cappella — or with some sort of risky twist that reminded the audience that at his best, there aren’t many Season 14 hopefuls left who can match his actual vocal skill. But without that kind of game-changer, Rayvon’s game is likely to be over in the next two or three weeks.

On that note, I turn it over to you! What did you think of Top 9 performance night? Who were your faves? Who’s at risk? Take our poll below, then sound off in the comments!