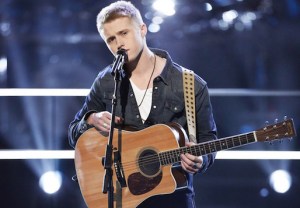 We begin tonight’s recap of The Voice by congratulating death and taxes on finding a new friend to travel with them down Life’s Certainties Blvd.

Because more unwavering than Xtina’s love of Feria No. 273: Peroxide Blonde and the hardness of Adam Levine’s abs is the way that NBC reality singing competition’s ends every single Knockout Rounds episode with a feel-good “Coaches’ Steal.”

Of course, if The Voice‘s commitment to a tried-and-true formula still leaves you feeling anxious, fret not: Carson Daly will most assuredly announce going into commercial that a Steal is imminent. (What better way to keep The Voice‘s rating of TV-AA… suitable for even your Aged Auntie with chronic high blood pressure?)

Not that there’s anything wrong with building a show’s philosophy around Anna Nalick’s straightforward advice to “juuuuuuuust breeeeeeathe.” Quite the contrary! If anything, The Voice Season 8 keeps giving us option upon option upon option of mega-talented vocalists for whom we can enthusiastically root over the next nine weeks.

With that in mind, let’s get to ranking the night’s three Knockout pairings in order from least- to most-promising winner: 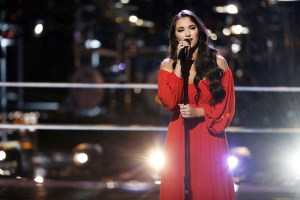 3. TEAM ADAM: Deanna Johnson – Roxette’s “Listen to Your Heart” defeats Blaze Johnson — The Fray’s “You Found Me” | I figured all the rehearsal-package discussion of Deanna’s insecurities would be rendered irrelevant by the time she took the stage. But despite a husky “signature tone” (as Xtina called it), there were intermittent pitch issues that stymied her quest for excellence. Luckily for Deanna, Blaze’s utter collapse — complete with shouty chorus and an unwelcome vocal break on the bridge — gave her a free pass to work through her issues in the live voting rounds.

2. TEAM PHARRELL: Caitlin Corporale – Demi Lovato’s “Warrior” defeats Hannah Kirby – Steve Winwood’s “Higher Love” (Hannah stolen by Blake) | Caitlin’s got a voice strong enough to lift a cadillac over her head — and while “Warrior” may not be the greatest song ever written, Pharrell’s resident diva imbued it with a wide-eyed, against-ever-obstacle resilience that proved solidly stirring. She’s really talented — but she’s going to need to learn to be interesting, too, if she wants to survive into the Top 10.Hannah’s vocals, in comparison, weren’t quite as precise — and her Elaine Benes-on-Seinfeld choreography made it harder to envision her as America’s next great pop star. But if Blake can find the right kind of gut-wrenching blues ballad to bring out the grit in her vocals, Hannah might prove an astute steal-back.

1. TEAM BLAKE: Corey Kent White – Tim McGraw’s “Live Like You Were Dying” defeats Cody Wickline — Justin Moore’s “‘Til My Last Day” | Cody came into the Knockouts as a fan fave with growing buzz, but his Justin Moore cover had all the intensity and unexpectedness of white ceiling paint. (Yes, it was serviceable and pretty — but it lacked any kind of specificity or intensity.) So when Corey followed up by managing to bring a deep emotional heft even to cheesy lines like “I watched an eagle as he was flying” — with an appealing raggedness of tone and solid pitch — the battle was all but done. Corey’s a little less flashy than some of his Season 8 counterparts, but with Blake in his corner, don’t put dirt on his grave just yet. (Yep, that’s a Nashville reference there for ya.)

Your turn. What did you think of Night 2 of the Season 8 Knockout Rounds? Who were your faves? Did the coaches get it right? Take our poll below, then expand on your thoughts in the comments!