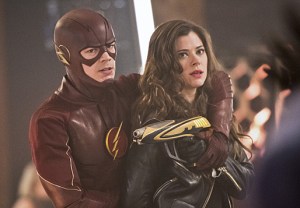 This week on The CW’s The Flash, Barry relived the fateful day in which the Weather Wizard terrorized Central City and Wells (unbeknownst to anyone) killed Cisco for knowing too much.

Was Barry’s day any better this time around? Let’s take stock of what changed, despite Dr. Wells’ repeated warnings to Barry that “time is an extremely fragile construct” prone to unleashing “cataclysm” if tampered with:

IRIS THEN: Her subconscious feelings jarred by the attack on the cop shop and then the tsunami, Iris professed her love to Barry, and they kissed.
IRIS NOW: Giddy Barry tried to be proactive by, after breaking up with Linda, meeting Iris for coffee and a big, clumsy download of emotions — ones that she was in no mindset to reciprocate, still. What’s more, Barry got slugged by Eddie for his overture, though all fences were mended when Cailtin “explained” that Barry was suffering from “Lightning Psychosis.”

CISCO THEN: Suspicious about Dr. Wells, Cisco poked around the containment field gizmo, realizing that his boss faked his “fight” that night with the Reverse Flash — because they are one in the same. Wells sneaked up on Cisco, confessed that he is Eobard Thawne and that years ago he meant to kill Barry, not his mother Nora. The doc then used his vibrating hand to kill Cisco.
CISCO NOW: Because Barry never relayed the news that Iris’ boss was investigating Wells, Cisco’s suspicions were not roused. Instead, he (begrudgingly) attended his brother Dante’s birthday party, though Caitlin nicely tagged along. Later, when Cisco quits S.T.A.R Labs after arming Captain Cold & Co., Wells has a talk with him — down by the containment field gizmo, natch — speaking of how Cisco is “family” and in a way is the son Wells never had. (IOW, a very different outcome!)

THE VILLAIN THEN: Mark Mardon emerged as the Weather Wizard, out for revenge against Joe. In an attack on the CCPD, Captain Singh is gravely injured. Mardon later kidnaps Joe and unleashes a tsunami on Central City, which Barry races to stop.
THE VILLAINS NOW: Knowing what he knows, Barry easily gets the drop on Mardon and locks him up in the Pipeline. Instead, Captain Cold, Heat Wave and Snart’s sister Lisa (aka Golden Glider) launch an offensive against the Santini family’s casino — using guns that Cisco is forced to make for them, because they kidnapped Dante. Cold later tortures Dante until Cisco reveals The Flash’s identity. After Barry thwarts the “rogues gallery’s” attack on a money truck, he is forced to reach a compromise with Snart: Cold has free reign to rob, but he won’t kill. Or else Barry will come for him, identity revealed or not.

So… though Barry prevented Singh’s hospitalization and the tsunami threat, he now has a villain on the loose aware of The Flash’s identity. Also, things went much worse for Mason Bridge, who was paid a visit by Reverse Flash and (forever!) prevented from writing “the story of the century. This century, anyway.” After Barry catches wind of Mason’s “disappearance,” he meets up with Joe to acknowledge, “You were right” about Wells. “All of it.”

What did you think about “Rogue Time”? A little too tidy a “reset” of the bananas stuff that went down last week?