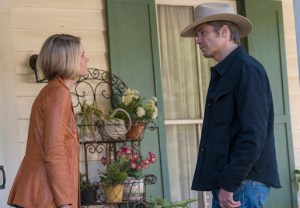 You had to sense, as each minute of this week’s Justified ticked by, that something major was going to happen come 10:55 pm. That there would be a betrayal, and or a dead body (or dead bodies), and or a significant reversal of fortune for someone.

Yet out of the multiple scenarios that my brain bandied about throughout the hour, the actual twist that arrived is not one I quite considered.

Coming out of last week’s botched breach of Markham’s vault, Boyd still is looking to steal the millions and vanish (with help from Limehouse, who coaxed a sizeable fee for his efforts). Raylan, though, still needs to catch his adversary in the act, and to that end enlists Duffy to cue Katherine to find out the when/how of Markham moving his moolah — which she does, proving to Markham (as Raylan had just warned) that Katherine is setting him up.

We then get an amusing game of I know that you know I know you know, as Raylan dangles a decoy armored truck in front of Boyd’s men. But Boyd’s too smart to take the bait. And Raylan knows that Boyd is too smart to take the bait. So Boyd sets out to secure the money another, very different way, while Raylan comes to realize that the feds’ deal with Ava has expired, since no matter how this plays out, she didn’t deliver enough intel leading to Boyd’s arrest on RICO charges.

When Raylan informs Ava of her CI contract not being honored, she scrambles to come through, in some other way. Having discovered Dewey Crowe’s alligator tooth necklace at Boyd’s bar, she suggests they go after Boyd for murder — but Raylan notes there’s not nearly enough evidence. Ava counters, “What if I got him to confess?” during a meet-up, where she assures Raylan she will use every available wile to get Boyd to cop to the killing.

But first, Boyd has a rendezvous with Markham, to trade Katherine for the millions. The exchange is made, after which Boyd suggests they each ride off into their “respective sunsets.” (As Boyd speeds away, Katherine is left to address accusations that Markham was her mark all along, aka fear for her life.)

Boyd’s next stop is to see Ava. But as they embrace, Ava grabs the gun from his belt, apologizes in advance and then shoots him. When Raylan quickly emerges from the shadows, Ava explains that Boyd was never going to confess, so she instead gave Raylan what he’s always wanted — “Boyd Crowder, bleeding at your feet.” She hops into Boyd’s truck with her fresh fake IDs — and the millions in the back — and sets out to disappear, though Raylan assures her, “I’m gonna come after ya.”

What did you think of the episode “Trust,” and what Ava’s bold moves mean for the final three episodes of the series?