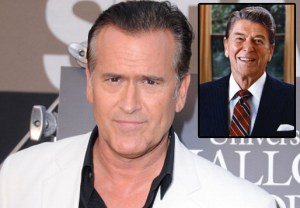 The Burn Notice vet has been cast as a pre-POTUS Reagan in Fargo‘s forthcoming second season, TVLine has learned exclusively.

Taking place in the late 1970s, Season 2 — a prequel to Season 1 that stars Patrick Wilson as a younger version of Keith Carradine’s Lou Solverson — is set against “the cultural transformation that was going on at that time,” as well as Reagan’s first campaign for President of the United States, previewed FX Networks CEO John Landgraf back in January. “He’s on his first campaign [and he] makes a swing through Fargo. Some of the characters have some interactions with him. And some of his movies are also a part of the show.”

It’s unclear if one of those folks interacting with Campbell’s Gipper will be former Burn Notice co-star Jeffrey Donovan, who is set to recur in Fargo‘s second season.

Campbell, who recently signed on to reprise his role as Ash in Starz’ 10-episode Ash Vs. Evil Dead series, will appear in one episode.

Fun fact: Campbell made an unbilled cameo in the big-screen Fargo. In the kidnappers’ cabin, he can be briefly seen on the TV.