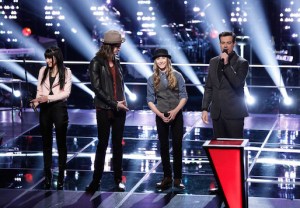 Permission to say something terrible? (Actually, I can’t hear you over the din of the Internets, so I’m just going to proceed…)

I involuntarily groan whenever I hear the opening line of Whitney Houston’s “The Greatest Love of All” — you know, that whole “I believe the children are our future” bit — because, well, of course children are our future. Nobody’s arguing otherwise! I’ve gotten more meaningful bits of philosophy from an inspirational cat poster!

And yet, after watching Sawyer Fredericks and Mia Z (a pair of insanely talented 15-year-olds), and later, the sickeningly good 17-year-old Koryn Hawthorne deliver some next-level vocals on the opening night of The Voice‘s Season 8 Knockout Rounds, I’m suddenly throwing up a Gospel hand and demanding that their coach Pharrell Williams “teach them well and let them lead the way.” 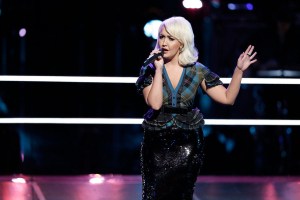 This is not to say, however, that Oldie Olsens (relatively speaking) don’t hold some of the answers in their experienced hands, either. Kimberly Nichole, Sarah Potenza and Meghan Linsey are all near or over the age of 30 (aka past the deeply depressing sell-by date championed by most major labels), and yet each of ’em boldly reminded fans that they’ve also got legitimate chances at inheriting Craig Wayne Boyd’s throne when the competition concludes a little less than two months from now.

All of this is my roundabout way of saying we might be looking at the deepest bench of contestants in The Voice‘s eight-season history. (Heck, poor Pharrell — after losing Anthony Riley to some undisclosed personal issue — had to make the unprecedented move of creating a three-person Knockout, in which only two could advance… and even the “loser” was pretty great.)

Anyhow, while it’s certain to prove a near-impossible task, I’m going to get to ranking the night’s six Knockout pairings in order from least- to most-promising winner:

6. TEAM ADAM: Nathan Hermida — “Leave Your Lover” defeats Clinton Washington — “Wanted” | Nathan’s sweeter than a toddler’s chewable vitamin — as is his tone — but on a night with something approaching Amanda Brown-level talent in almost every matchup, his not-always-accurate pitch and retiring demeanor left me less-than-optimistic about his chances once public voting begins. 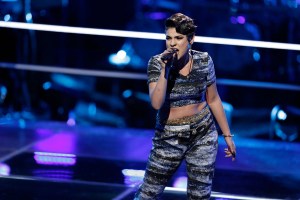 5. TEAM XTINA: Sonic — “A Woman’s Worth” defeats Ashley Morgan — “Heartbreaker” | Sonic’s voice wobbles ever-so-slightly when she’s stretching all the way to the top of her range, but I loved how she imbued Alicia Keys’ anthem with a supple sexiness while showing a real understanding of dynamics, too. She’s not just screaming a note — she’s telling a story. Ashley’s pitch was perhaps even more spot-on, but she had her foot on the gas pedal from start to finish — and the lack of push and pull in the performance made it emotionally stagnant.

4. TEAM BLAKE: Meghan Linsey — “(You Make Me Feel Like) A Natural Woman” defeats Travis Ewing — “I Don’t Want to Be” | From a vocal standpoint, Meghan shed her country-music cocoon tonight and spread her soul wings as majestically as a freshly hatched butterfly. Those Xtina-esque runs she executed in the final seconds of her classic Aretha cover were jaw-droppingly good. I just hope Blake (or somebody on his team) realizes Meghan’s look — the tortured hair helmet and tablecloth-plaid blouse (paired with sequined skirt!) — need to wind up in the same storage locker as her cowboy boots and twang. Otherwise, the juxtaposition is just too jarring. The handsome and charismatic Travis threw his soul down on the stage, too, but I think going second — and realizing he couldn’t match his rival’s vocal muscle — caused him to overshoot the target. Is it crazy I kinda wanted someone to steal him? 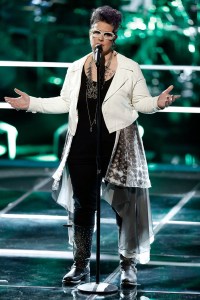 3. TEAM BLAKE: Sarah Potenza — “Wasted Love” defeats Brian Johnson — “Nothing Ever Hurt Like You” (Brian stolen by Adam) | I loved how the typically roaring Sarah reined in her power and brought tender shading to her very astute choice of Matt McAndrew’s Season 7 finale single. (How is that song not an international smash in the vein of Phillip Phillips’ “Home”?) On the flip side, though, I didn’t really get the judges’ enthusiasm for Brian, whose Lite FM approach was mostly in tune, but came off like a piece of plain toast sitting on a platter next to Sarah’s loaded omelette with hash browns and sausage. (Yes, I’m jonesing for a diner-style breakfast… it’s been too long, people!)

2. TEAM PHARRELL: Sawyer Fredericks — “Collide” and Mia Z — “Hold on, I’m Comin'” defeat Paul Pfau — “I Don’t Need No Doctor” | Blake went absolutely bonkers over Mia’s emergency-broadcast-system high notes, and I was right there with him. The girl doesn’t reach for the tippy top of her range just for the heck of it, but instead uses it sparingly to punctuate the gruff, sensual blues vibe that courses through all of her performances. Slightly better diction wouldn’t hurt, but her twist on Sam and Dave’s pleading soul anthem was the night’s most original arrangement. Sawyer, while not as range-y as Mia, is no less startling — thanks to a beyond-his-years sincerity and a beautiful break in his voice that calls to mind the folk-rock greats of yesteryear. He’s so connected to the lyrics that he makes me believe in past lives: I mean, how can anybody convey so much emotion at 15? Paul, for his part, was rock-solid, but his clenched-jaw delivery made him a little less accessible than his rivals. As Xtina noted, he held back just enough to open the door for Mia and Sawyer to sail to the Live Playoffs. 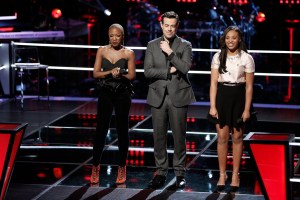 1. TEAM XTINA: Kimberly Nichole — “If You Love Somebody Set Them Free” defeats Koryn Hawthorne — “Try” (Koryn stolen by Pharrell) | I don’t come from the “Gold Stars for Everyone!” school of criticism, but I couldn’t disagree with the judges that there were two winners and zero losers in this Knockout. Heck, when Kimberly herself couldn’t contain her joy over Koryn’s performance — shouting “Sing, girl!” and wrapping her younger rival in an embrace at the end of her Pink cover — it was clear we’d transcended competition and entered into the “People Who Love People Who Love Music as Much as Them” part of the show. Koryn’s depth of tone — and steely dive into the lyric — were crazy impressive. Still, Kimberly’s bluesy stomp and growlicious tone have me ready to pre-order her full album (and we’ve got like eight weeks left to go in the competition!). When Adam said he felt like we’d fast-forwarded to the finals and these were the last two left standing, all I could do was nod and say, “from your lips to God’s ears, dude!”

What did you think of Night 1 of the Season 8 Knockout Rounds? Who were your faves? Did the coaches get it right? Take our poll below, then expand on your thoughts in the comments!